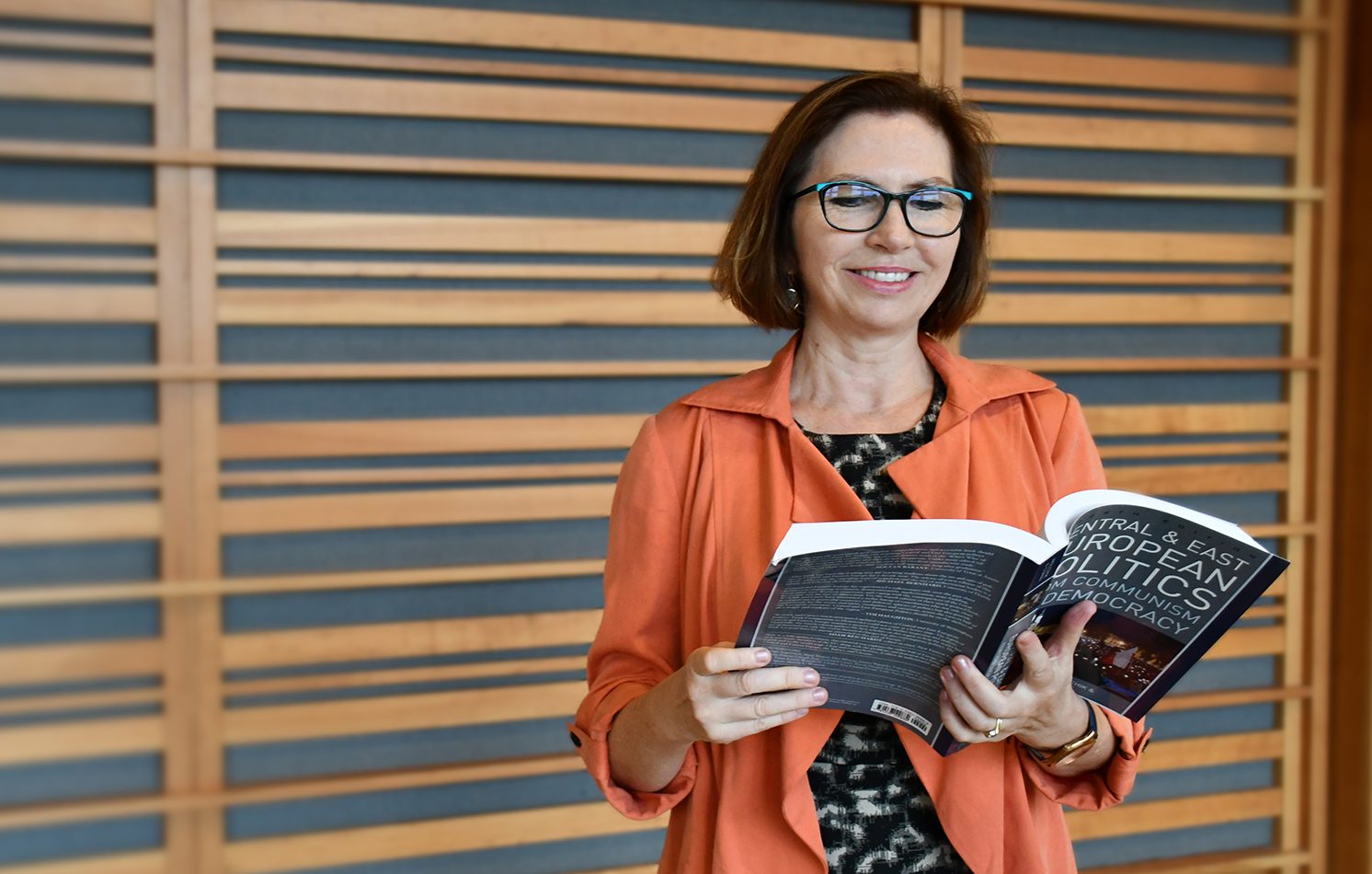 I am an Associate Professor and Department Head in the Department of Political Studies at Queen’s University. I specialize in the study of nationalism in contemporary European politics, with particular expertise on Central and Eastern Europe (CEE). I am also President of the Association for the Study of Nationalities (ASN), which is the leading international scholarly association in the field of nationalism and ethnicity studies, and is headquartered at the Harriman Institute, Columbia University, New York. I earned my PhD in Political Science (2000), and MA in Russian and East European Studies (1992), from the George Washington University in Washington, D.C. Before joining the Queen’s faculty, I was Assistant Professor of Political Science and Coordinator of the Women’s Leadership Program in U.S. and International Politics at the George Washington University.

I have held a number of prestigious fellowships and awards, including: a Distinguished Alumni award from the George Washington University’s Department of Political Science in 2013 (as the first person selected for this recognition, which was established to mark the Department’s 100th anniversary); the Fernand Braudel Senior Fellowship from the European University Institute in Florence, Italy in 2006; the 2005 Sherman Emerging Scholar Award from the University of North Carolina, Wilmington; as well as research grants from the Social Sciences and Humanities Research Council of Canada (SSHRC), the Woodrow Wilson International Center for Scholars, the Institute for the Study of World Politics, the American Council of Learned Societies/Social Science Research Council, the George Hoffman Foundation, and the Hungarian Academy of Sciences. I was a visiting scholar at the Institute for Advanced Studies in Vienna, Austria (2010-11), the Institute for Minority Studies, Hungarian Academy of Sciences in Budapest, Hungary (May 2016), and the Political Science Department of Babeș-Bolyai University in Cluj-Napoca, Romania (March 2016). I am a General Editor of the European Yearbook of Minority Issues and serve on the international editorial boards of several major peer-reviewed journals, such as Ethnopolitics, Problems of Post-Communism, and Intersections.

My research centers on questions of nationalism and democratization in post-Cold War Europe. Nationalism and problems of democratization are among the core issues of scholarship and teaching in political science, with increasing relevance to policy-makers. Nationalism is a powerful political ideology, shaping state and regime formation, and generating deeply-held sentiments and attitudes with profound impact on practices of inclusion and exclusion. Democratization also creates ongoing dilemmas for scholars, although few political ideologies and systems have received as much attention in political science as democracy.  Within this broad area of research, my most significant contributions have been to the literature on (a) nationalism and state-minority conflict over language rights and territorial self-government claims; (b) kin-state politics (trans-sovereign nationalism); and (c) minority political agency. My scholarship relies on extensive comparative research, involving field research in multiple settings.

I am the author of Talk of the Nation: Language and Conflict in Romania and Slovakia (Cornell University Press, 2007). I have published articles in major journals such as Perspectives on Politics; Publius; Foreign Policy; Nations and Nationalism; Europe-Asia Studies; Problems of Post-Communism; East European Politics and Societies, as well as chapters in edited volumes published by major university and academic presses (e.g., Mabry et al, Divided Nations and European Integration; Wolchik and Curry, Central and East European Politics: From Communism to Democracy). I have recently co-edited two special issues about the impact of Europeanization on minority mobilization and inclusion. One is titled Europeanization and Minority Political Action in Central and Eastern Europe and was published in Problems of Post-Communism (volume 64 no.5, 2017) and subsequently also as a book by Routledge in August 2018. The other, Europeanization and Changes in Minority Inclusion in Central and Eastern Europe, came out in Intersections: East European Journal of Society and Politics (volume 3 no.5, 2017).

I am currently writing a comparative book about the sources of democratic minority political agency in the EU framework, focusing on six large ethno-linguistic minorities in Central and Eastern Europe. Entitled Resilient Minorities and Sustainable Democracy in Multiethnic Societies: Lessons from Hungarians, Poles, and Russians in Central and Eastern Europe, this book develops an empirically-derived theory about the sources of democratic minority political agency.  A core component of this theory is the ability of minority populations to maintain a form of “institutional capital” that includes a combination of intermediary institutions (civil society and associated organizations) that allow for both the cultural bonding necessary for ethnicity to exist (or ethnic boundary-making) and the inter-ethnic bridging necessary for social solidarity and political integration.

I am also engaged in a comparative project that explores the way newcomers affect established democratic balances in contemporary democracies.  Entitled The Politics of Complex Diversity in Contested Cities, this project is funded by a SSHRC Insight grant for which I am the Principal Investigator and Keith Banting and John McGarry are co-applicants. Our research focuses on how contestation unfolds in four major historically divided cities: Montreal, Belfast, Brussels, and Vilnius.  Immigration, refugee flows, and migration present challenges to established democracies. In historically contested societies, earlier conflicts have tended to produce a hierarchy of status between traditional ethnic communities.  Ethnic newcomers have the potential to unsettle the hierarchy.

Additionally, I am an Academic Coordinator in the Jean Monnet Network Grant entitled Between Europe and Russia: Domains of Diversity and Contestation (jointly-hosted by McGill University and the University of Montreal), which brings together 25 scholars from 11 universities and six countries.