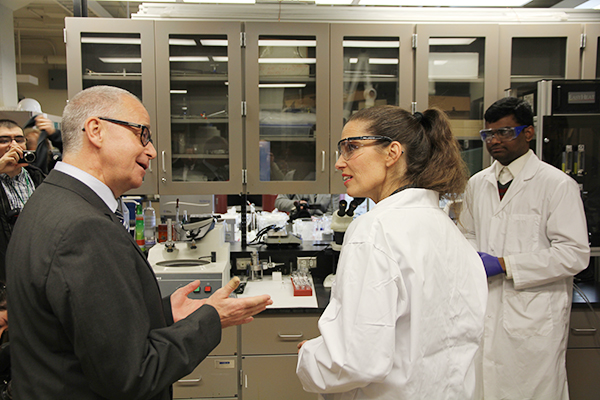 An international research project based at Queen’s University that is focused on developing new clean energy technologies has received a $4-million grant from Natural Sciences and Engineering Research Council of Canada.

The Engineered Nickel Catalysts for Electrochemical Clean Energy (Ni Electro Can) research team, led by Queen’s researcher Gregory Jerkiewicz (Chemistry), will use the NSERC Discovery Frontiers grant to develop the next generation of nickel-based materials, which will give Canada’s energy sector a competitive advantage. The grant is only given to one project once every two years.

“This project is an excellent example of the impact that Queen’s researchers are having in Canada and internationally,” says Daniel Woolf Principal and Vice-Chancellor, Queen’s University. “Our increasingly globalized world means it is important to build connections and networks beyond our own borders. Professor Jerkiewicz and his international team are a prime example of how innovative, collaborative projects remain at the leading edge of discovery.”

The research team aims to create affordable, alkaline fuel cells for the production of energy; develop new technologies for hydrogen-based energy storage; and transform glycerol into value-added chemicals that will make biodiesel production cheaper and greener.

“Congratulations to Dr. Jerkiewicz and his team,” said the Honourable Kirsty Duncan, Minister of Science. “This Discovery Frontiers announcement is a great example of the government’s commitment to fundamental, discovery-driven research that addresses significant scientific problems and opens new horizons. The Government of Canada is committed to strengthening its support for fundamental research that can create better tomorrows for Canadians.”

Currently, fuel cells employ acidic electrolytes, which are expensive because they require platinum catalysts. The Ni Electro Can team is developing nickel materials that will be used in new alkaline fuel cell technologies, making them cheaper to build. The new nickel materials will also find application in alkaline water electrolyzers, thus making this technology more energy efficient. The new fuel cells and alkaline water electrolyzers will assist Canada in transitioning to the hydrogen economy.

The original story was published in the Queen’s Gazette.