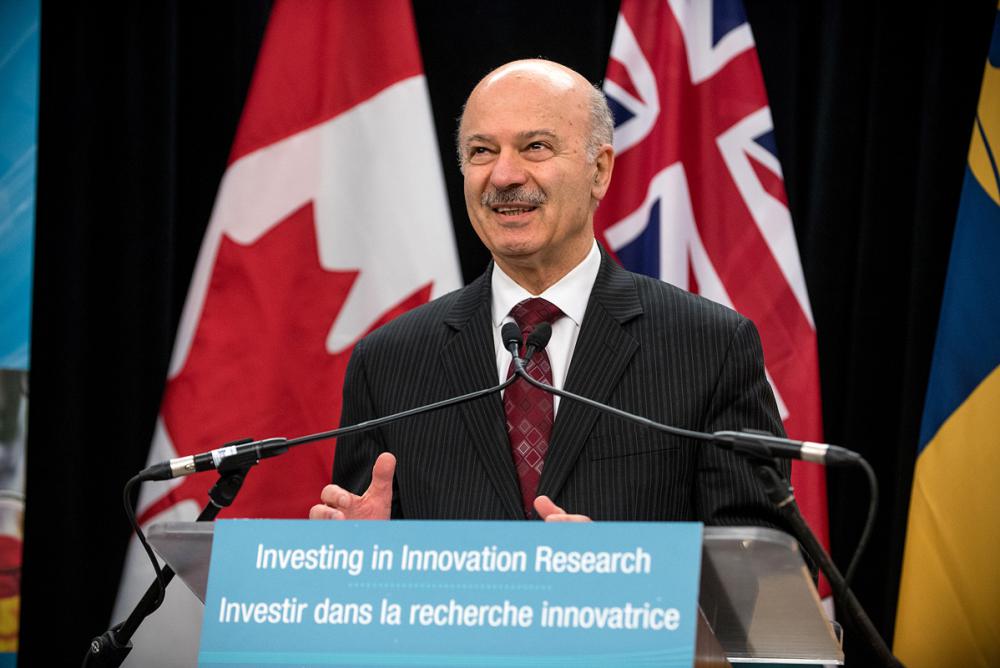 The Government of Ontario today announced more than $4.5 million in new infrastructure and research funding for four Queen’s researchers through the Ontario Research Fund – Research Excellence and Research Infrastructure programs. The Honorable Reza Moridi, Minister of Research, Innovation and Science, made the announcement today at Queen’s, as part of a $77-million investment in research across the province. The grants will provide funding to support key research programs, as well as the operational and equipment acquisition costs associated with research that is leading-edge and transformative.

“The funding announced today highlights Queen’s record of sustained research excellence and demonstrates how our researchers are working to address crucial issues – such as renewable energy development – facing the province and the public at large,” says Queen’s Principal Daniel Woolf. “We are grateful to the Government of Ontario for its continued investment in research and innovation at Queen’s and across the province.”

A leader in the field of energy and power electronics research, Praveen Jain (Electrical and Computer Engineering), the Canada Research Chair in Power Electronics, has received $4 million from the Ontario Research Fund – Research Excellence to develop small-scale, point-of-use photovoltaic (solar) power systems for residential use. Dr. Jain will lead a team of researchers from four Ontario universities in developing new technology to reduce cost and increase the efficiency, output, and reliability of residential solar systems. Dr. Jain was previously awarded funding from the Ontario Research Fund.

“Our government recognizes the importance of investing in our innovation ecosystem,” says Reza Moridi, Minister of Research, Innovation and Science. “We are proud to support the researchers at Queen’s University who are working on transformative research that will help strengthen our province’s competitive edge.”

Geophysicist Alexander Braun (Geological Sciences and Geological Engineering) has received $180,000 to support the acquisition of a superconducting gravimeter – one of only 12 such devices in the world. The device will be used for monitoring fluid migration processes in oil, gas, and water reservoirs, to monitor mass changes in reservoirs, and to help mitigate environmental hazards related to extraction.

Psychology researcher Jason Gallivan (Psychology) has received $150,000 from the fund to support new infrastructure in the Memory, Action, and Perception laboratory (MAPlab). Dr. Gallivan’s research examines how a stroke or other neurological disorder can alter the perceptual, cognitive, and motor-related mechanisms of the brain.

In addition, physicist Ryan Martin (Physics, Engineering Physics, and Astronomy) has received a grant of $250,000 to support the establishment of a world-class facility to develop p-type point contact detectors. These complex detectors are used to more accurately measure interactions with difficult-to-detect particles, such as neutrinos and dark matter.

“Innovative research is essential for future economic growth and I am absolutely thrilled with the investments being made in projects in Kingston and across Ontario,” says Sophie Kiwala, MPP for Kingston and the Islands. “The world-class research being conducted at Queen’s University is an immense source of pride for our region and I am excited and anxious to see the results of this funding. This investment demonstrates Ontario’s commitment to supporting cutting-edge, innovative research that will lead us into the future. Congratulations to all of the Queen’s researchers receiving these competitive awards.”