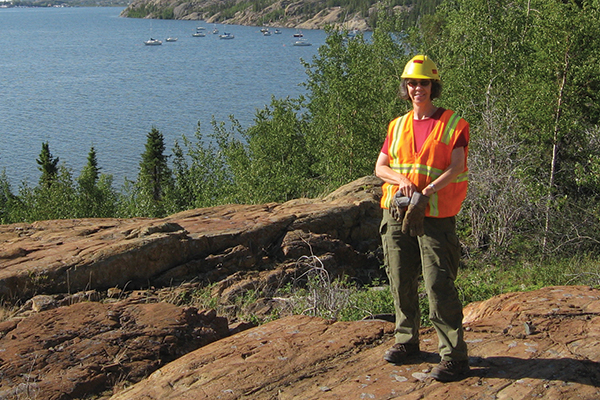 Heather Jamieson, a professor and researcher in the Department of Geological Sciences and Geological Engineering, has been named the 2019 Rick Hutson Mentorship Award winner from Women in Mining Canada (WIMC).

This award is being presented to Dr. Jamieson in recognition of the role she has played in mentoring, supporting and guiding young women in their studies and in taking their first steps, and then beyond that, in helping them to manoeuvre in the early days of their mining careers.

An outpouring of letters of support from Dr. Jamieson’s students, both past and present, solidified her candidacy for this award and speaks to the impact that she has had on these women and countless others in their careers.

A critical part of Dr. Jamieson’s career has been sharing her enthusiasm for environmental geochemistry with students, introducing them to fieldwork at mine sites, and exposing them to the complex issues affecting communities in the Canadian North.

“During the first summer that I worked as a geological field assistant (at age 17), I met two female geologists who were truly inspirational pioneers. I was also taught at Queen’s by Dr. Mabel Corlett, one of the first tenured women professors of geology in Canada,” Dr. Jamieson says. “It was pretty unusual for women to be in the field of geology and mining in the 1970s, and there was some resistance to sending women to remote mines or field camps. Over the years things have improved but there are still challenges. I have supervised more than 50 graduate students, about half of them women, and I have been delighted to watch them progress in their careers since leaving Queen’s.”

Women in Mining Canada identifies the three pillars of its organization as: “Educate, Empower and Elevate.” Dr. Jamieson has certainly been a model for these pillars. She believes that teaching and supervising includes respect for a good work-life balance, and translates this to all of her students.

Of the more than 50 graduate students that Dr. Jamieson has supervised, all have found professional employment shortly after graduation with mining companies, environmental consultants, or as government regulators.

It is also worth noting that the Department of Geological Sciences and Geological Engineering consists of 50 per cent female faculty members, one of the highest of any geological program in Canada. This ratio is similar for undergraduate and graduate students in the department, as well. Dr. Jamieson has played a significant role in achieving this ratio, and has been a strong mentor and influence on young women entering the mining industry for decades.

This award was presented to Dr. Jamieson during the Prospectors and Developers Association of Canada (PDAC) annual convention. Women in Mining Canada hosted an event at the convention on Tuesday, March 5 to celebrate all of their Trailblazer Award Winners, at the Metro Toronto Convention Centre.

Further information about the Rick Hutson Mentorship Award and the WIMC awards presentation can be found on the Women in Mining Canada website.