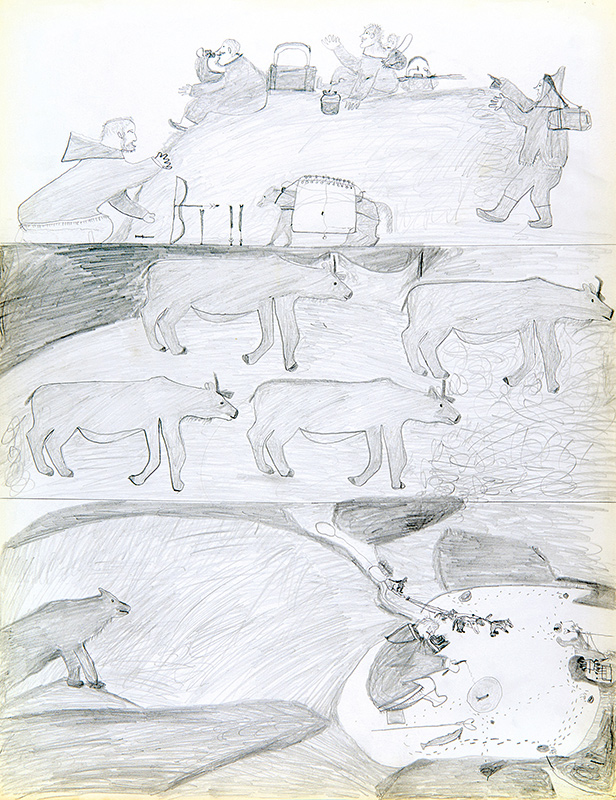 In 1964, as part of an outreach project, Inuit people in North Baffin communities created hundreds of drawings, recording memories of their childhoods, recalling stories passed down for generations, and capturing moments of everyday life. These drawings have been brought out of storage and into the public eye by Norman Vorano, Queen’s National Scholar and Curator of Indigenous Studies at the Agnes Etherington Art Centre.

“Draw me something. Anything,” said Terry Ryan to the Inuit he encountered.

The tides were changing in the North. The 1950s and 1960s saw influences from the South, including social programming, waves of civil servants, and residential schools, significantly transform traditional camp life – a way of life known to the Inuit since the 19th century. Recognizing the impending impact on these peoples and their culture, Terry Ryan, the arts adviser for the West Baffin Eskimo Co-operative in Cape Dorset, set out by dogsled to the relatively “untouched” communities of North Baffin Island. Armed with stacks of paper, pencils, and a $4,000 grant to fund his journey, he wanted these individuals to record their fleeting way of life, their feelings, and their cherished traditions.

Mr. Ryan did not want to influence what was drawn, so he gave little to no instruction. About a month after distributing supplies, he returned to each camp and purchased all that had been produced. In total, he collected 1,840 drawings created by 159 Inuit living in and around Clyde River, Arctic Bay, Pond Inlet, and Igloolik. The drawings, many of which included writing (Inuktitut), provide a cultural repository of Arctic life in 1964 – from stories passed down through generations, big moments in individual lives, to quotidian details. Upon his return to Cape Dorset, Mr. Ryan catalogued the collection and it was placed in storage where, other than a brief interlude in 1986, it has remained.