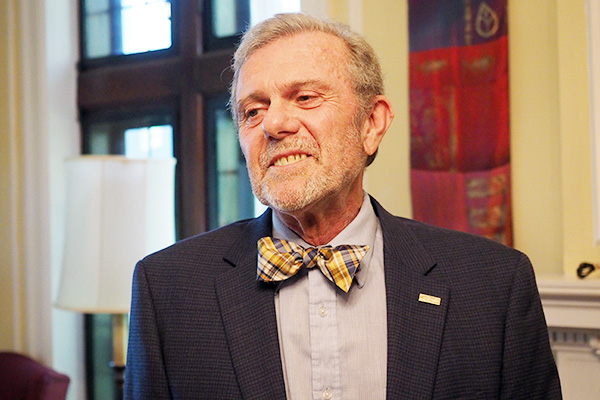 In the field of computing, efficiency and effectiveness are key. Researchers are continuously searching for solutions to the computational challenges that come with processing massive amounts of data in a timely fashion.  Selim Akl, professor in the School of Computing and a pioneer of parallel computation, has garnered worldwide recognition for his success in finding efficient and improved solutions to this issue. Recently, Dr. Akl was recognized by CS-Can/Info-Can, the national computer science academic organization, with a Lifetime Achievement Award for his outstanding and sustained contributions to the field.

“It’s a huge honour and I owe a lot to my colleagues in the School of Computing and to my students. They really are inspiring,” Dr. Akl says. “Queen’s is a special place because it gives you unfettered freedom to follow your research interests.”

Dr. Akl felt this sense of autonomy in pursing his research program when he began his career at Queen’s in 1978. Parallel computation involves the use of several computers to solve a problem simultaneously, a concept which was introduced through Dr. Akl’s book Parallel Sorting Algorithms in 1985. The work was the first of its kind in this area of specialization, allowing Dr. Akl to become a pioneer in the field.

“There are real-life situations that necessitate the use of a specific number of computers and if you have one less, you cannot solve the problem,” he says. “The big weather centres use massive parallel processors to give us up-to-the-minute updates on the weather but sometimes they are not even enough because if a storm decides to hit and you hadn’t predicted it in enough time to warn people, it would be too late.”

Dr. Akl has used parallel computation as the core foundation of his research program while branching out into other areas of computing, including computational geometry and cryptography, in which his work on security in hierarchical organizations remains state-of-the-art. He also explored biomedical computing, developing algorithmic techniques to analyze electrocardiograms for better diagnosis and treatment of cardiac arrhythmias. In recent years, he has been studying computational processes in nature and more generally, unconventional computation. In 2009, he originated the idea of quantum chess.

“Dr. Akl’s research contributions span many facets of computing that influence virtually every aspect of daily life,” says Kimberly Woodhouse, Interim Vice-Principal (Research).  “The lifetime achievement award is a fitting recognition of his leadership and continued impact on the field internationally.”

As the Queen’s School of Computing celebrates its 50th anniversary this year, Dr. Akl’s colleagues and collaborators are thrilled to celebrate this significant milestone in his career.

“I would like to dedicate this award to the School of Computing as it’s been a wonderful home for me,” Dr. Akl says. “If you have a good working environment, then you have no complaints.”

Dr. Akl will be presented with the Lifetime Achievement Award at the annual CS-Can/Info Can meeting at McGill University on June 3.

Read the original story in the Queen’s Gazette.