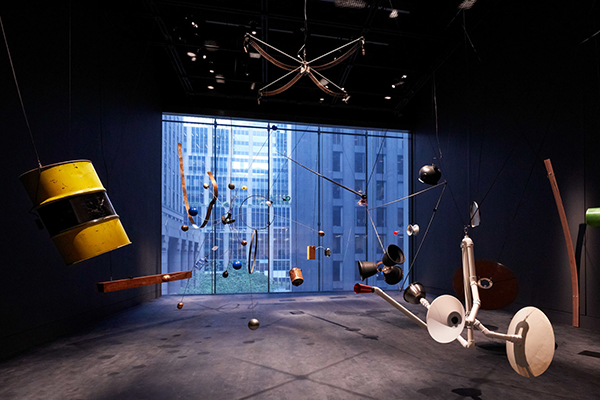 Inside the Museum of Modern Art (MoMA) in New York City, a suspended jungle of everyday items has become the setting for audiences to experience the nature of sound in new ways, thanks in part to Queen’s composer/musicologist Matt Rogalsky. Entitled Rainforest V (Variation I), the exhibit is the latest evolution of late music pioneer David Tudor’s famed Rainforest series, which uses found objects to transform sounds by acting as natural filters.

“Tudor’s Rainforest series is not intended to evoke literal rainforest soundscapes,” says Rogalsky, a continuing adjunct associate professor in the Dan School of Drama and Music at Queen’s. “The title was gleaned by Tudor from choreographer Merce Cunningham’s 1968 dance RainForest, for which he was commissioned to make the first piece under that name. But the sense of being surrounded by many sources all chirping, humming, and buzzing – what Tudor called an ‘electronic ecology’ – is certainly familiar to anyone who has experienced a real rainforest.”

Before his death in 1996, Tudor had realized many versions of the artwork since creating the original Rainforest in 1968. Rainforest IV was created and performed with the help of a number of younger artists under the ensemble name Composers Inside Electronics (CIE). Performances of Rainforest IV would last multiple hours, during which performers performed sound through suspended objects while visitors walked amidst them to experience spatial and textural effects of bending and morphing audio.

With Rainforest V (Variation I), Rogalsky, who was invited to consider himself a member of CIE in the early 2000s, collaborated with Tudor’s long-time sound artist colleagues John Driscoll and Phil Edelstein to design a version of the work that would play on its own, so gallery-goers could enjoy the piece as an extended exhibition.

Comprised of metal barrels, wooden boxes, cans, jars, lampshades, computer parts, fiberglass tubes, and more, the exhibition uses software to transmit sounds specially designed to best resonate with each object – creating a shifting, interactive landscape for audiences to explore. This version, created in 2009 for an exhibition in Mexico City and acquired by MoMA in 2012, was put on display on Oct. 21, 2019 and runs until Jan. 5, 2020.

“The acquisition and exhibition of this piece by MoMA is another very satisfying outcome of my research on Tudor and the Rainforest series,” says Rogalsky, who connected with Tudor in the early 1990s while conducting his master’s research, and went on to earn a PhD investigating the history of the piece. “The artistry of David Tudor and CIE has been a major influence on my own pursuits as a musicologist and sound artist, and it is a privilege to carry on and build upon the legacy of his work. It makes me very happy that Tudor’s legacy is also now represented in the MoMA collection.”

The New York Times profiled the work earlier this fall and you can learn more about it and about David Tudor on the MoMA website. Listen to a selection of the exhibit’s audio below (headphones recommended):