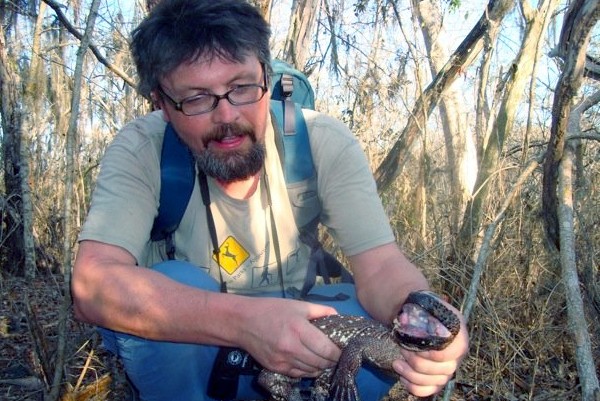 Andrew Stokes: What makes QUBS a good place for research?

Stephen Lougheed: What makes it remarkable is the high level of biodiversity it contains. It’s about 34 square km and contains myriad water bodies from small wetlands to substantial lakes, shorelines, ridges and swaths of intact forest. There are over 200 species of birds, many salamanders, frogs, turtles, snakes, flowering plants and fungi that exist on its land. What’s most interesting though is that it sits upon the Frontenac Arch, a southward extension of the Canadian Shield that stretches down through eastern Ontario and links the Adirondack Mountains to more northern parts of Ontario.

AS: How is that reflected in the local species?

SL: We have a mix of flora and fauna from both northern and southern regions, making it one of the most diverse regions in all of Canada. QUBS is home to both typically northern species like ravens, and tanagers and cuckoos, which are more characteristic of southern climes. Many of those southern species, such as the grey rat snake and the five-lined skink, Canada’s only lizard species, reach their range limit around QUBS and don’t live any farther north. It makes for excellent opportunities for research.

AS: What have you learnt about range limits?

SL: Along with many other researchers, we’ve shown that in recent years, range limits and phenology (the timing in the annual life cycle of fauna) are shifting. Things like beginning of breeding of certain frog species have shifted much earlier as a consequence of climatic change and rising mean annual temperatures. We’re unsure whether these animals have the plasticity to cope with such changes, whether we will see adaptation, or whether we might see local extinction.

AS: We can see the effects of climate change that close to home then?

SL: Certainly, it’s happening already in ways we may not realize. People in Canada like to make the glib joke that we could use some global warming when we’re in the depths of a severe winter, but it could also lead to increased frequency of severe ice storms and sustained droughts. At QUBS for example in some years we’ve seen some drier cliffs lose their vegetation because of insufficient water. We actually now have eight climate stations that are collecting data in real time, everything from solar radiation, through air and water temperatures to precipitation rates. It will allow us to test hypotheses about how individual species or even entire communities respond to changing environments by comparing directly to our climate data.

AS: Part of your work is also species and habitat recovery and land stewardship. Are there any success stories?

SL: Well it’s easy to be pessimistic but we have had some positive outcomes. For many reptile species of conservation concern, we have been combining genetics, ecology and population censuses to then make conservation recommendations based on these data. For example, the eastern foxsnake in southwestern Ontario was classified as “threatened” under the federal Species at Risk Act when we began studying it, but our research contributed to its elevation to “endangered.” This affords it greater protection. In biology it’s sometimes important to celebrate these small victories.

Read the original news release in the Queen’s Gazette.