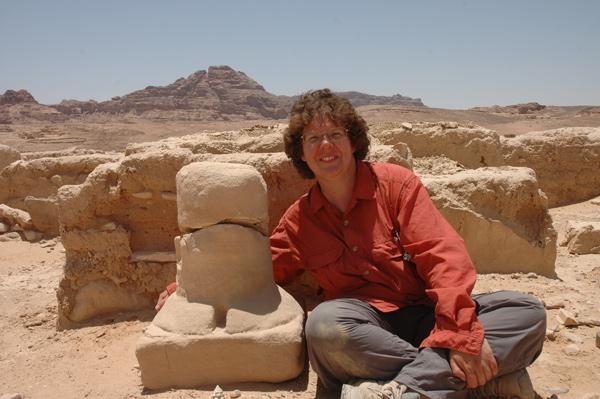 “Unfortunately, only the foundations of this Nabataean structure survived as its wall stones were removed for reuse in the adjacent fort constructed by the Romans following their annexation of the Nabataean Kingdom [early 2nd century AD],” said Associate Professor at Queen’s University (Canada) Barbara Reeves.

A few decades later the shrine was rebuilt with cult objects representing both the Nabataean town and the Roman garrison, she noted.

In order to harmonise relations with the indigenous population the Romans chose to use religious symbolism of both them and the Nabataeans, highlighting a peaceful coexistence, the archaeologist told The Jordan Times in a recent e-mail interview.

Canadian archaeologist Barbara Reeves poses for a photo near a betyl in Humayma, some 240km south of Amman (Photo courtesy of Barbara Reeves)

“Immediately after the Roman annexation of the Nabataean Kingdom, the Romans established their dominance over Humayma’s local population by installing a garrison of 500 soldiers in a massive fort, dismantling Nabataean structures, and controlling the water and roads,” she highlighted, adding that within a few decades the narrative in this garrisoned town changed from dominance to harmony.

This “new harmony” is depicted most clearly in a community shrine where a betyl (standing stone) representing the Nabataean town god stood side-by-side with an altar honouring the Roman garrison’s god, Reeves pointed out.

Furthermore, a rock carving from a cult site in the hills also shows a Roman standard-bearer making an offering in front of both his garrison’s god and a larger-than-life-size gazelle that likely represents the local god, the researcher continued.

In 2008, Reeves became a director of the Humayma Excavation Project and with a team of scholars continues to work at the site.

“Humayma’s Nabataean and Roman cult objects are similar to those found at larger archaeological sites such as Petra. There are betyls, anthropomorphic and zoomorphic representations of gods set up in shrines and carved into cliffs. Some of these are accompanied by inscriptions in Nabataean, Thamudic, Roman, and Greek,” Reeves noted.

The betyl in Humayma’s community shrine represented the local Nabataean god who lived on Humayma’s most prominent landmark, a peak with a notched top directly behind the shrine, she elaborated, adding that the legionary altar is dedicated to Jupiter Ammon, the Roman garrison’s patron deity.

“Their side-by-side placement at the focal point of the community shrine advertises harmony between the town’s Nabataean civilians and Roman soldiers. In the late 3rd century AD these cult objects seem to have been deliberately destroyed. The destruction of symbols of civilian and military harmony most likely occurred during the civil uprising against the Romans led by Queen Zenobia of Palmyra,” Reeves said.

Note: This article originally appeared in The Jordan Times.