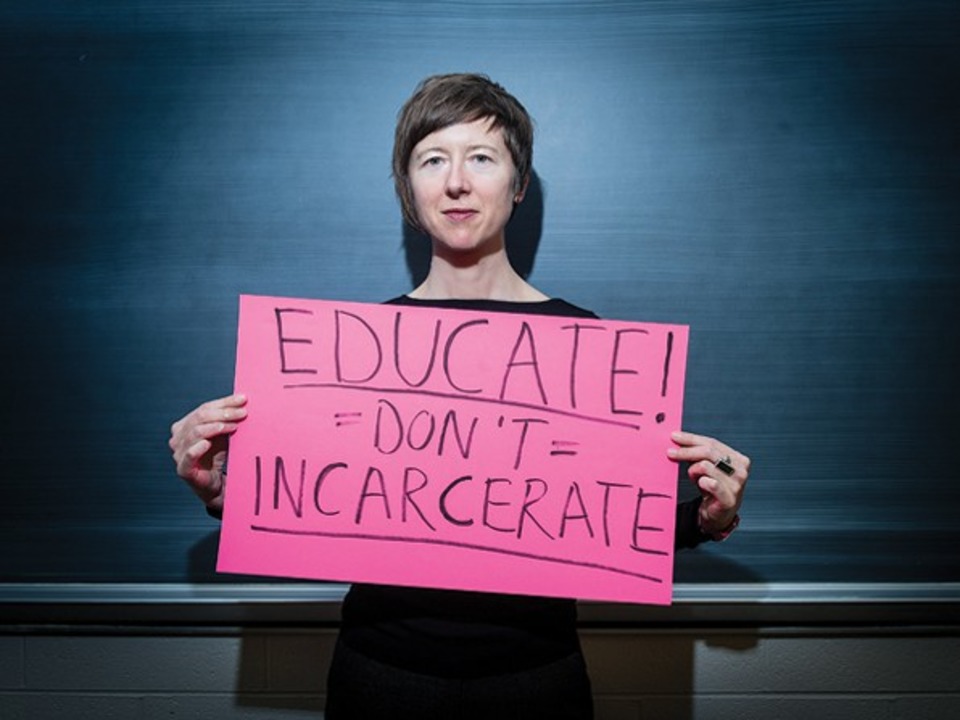 Lisa Guenther’s academic career has taken her around the world. Now, the Queen’s National Scholar program has brought her back home to Canada.

Arriving as a joint appointment in the Department of Philosophy and the Graduate Program in Cultural Studies this winter term, Dr. Guenther is the Queen’s National Scholar in Political Philosophy and Critical Prison Studies. Established in 1985, the objective of the QNS program is to attract outstanding early and mid-career professors to Queen’s to “enrich teaching and research in newly-developing fields of knowledge as well as traditional disciplines.”

Dr. Guenther’s research, she explains, is at the intersection of phenomenology, political philosophy, and critical prison studies, with further specializations in feminism and philosophy of race.

Her career path is just as varied – from New Zealand, to the United States, and a brief stop in Australia. Each place, Dr. Guenther says, has had a significant influence on her research.

After completing her PhD from the University of Toronto – having written her dissertation at an isolated cabin in the Yukon – her first academic position took her to New Zealand where she taught for nearly five years at the University of Auckland.

Moving halfway around the world was a massive change, but it also provided an opportunity to immerse herself in something new, yet familiar. She was intrigued that the Indigenous Maori culture and language is far more integrated into the mainstream than it is in Canada.

“Moving to Aotearoa New Zealand was a huge shift, but it was a really exciting place to live and I am really thankful for that opportunity. It challenged me to think about issues and questions I might not have encountered if I stayed on a more narrow academic track within Canada,” she says. “Seeing how Indigenous ways of being and knowing shape the university, the public school system, and national politics there was incredible. It opened my eyes to different forms of settler colonialism and different pathways to decolonization.”

At the same time she also made connections with a number of feminist philosophers in Australia, which also influenced her areas of specialization.

While she enjoyed her time at the University of Auckland, Dr. Guenther felt a need to be closer to home and accepted an assistant professorship at Vanderbilt University in Nashville, Tenn. The next decade would be formative years for her career.

Very quickly Dr. Guenther recognized that the communities surrounding her – the university, her neighbourhood, the city of Nashville – were clearly segregated based upon race and class. She began to read and research about the legacy of slavery and urban space.

In the midst of trying to come to grips with what she was witnessing, political activist and scholar Angela Davis arrived at the Department of Philosophy for a month-long seminar on slavery which Dr. Guenther audited. Davis began the seminar by explaining that the 13th Amendment abolishes slavery except for those duly convicted of committing a crime.

“To this day slavery is not formally abolished for people in prison,” Dr. Guenther says. “Learning this changed the direction of my research and my life in many ways. I started thinking and writing about prisons, mass incarceration, solitary confinement, and in particular the effect of extreme isolation on people’s capacity to think clearly and to perceive the world around them. This resonated for me as a phenomenologist because it raised questions about the nature of perception, experience and consciousness. Why is it that when we are deprived of a regular experience of sharing a space with other people that we don’t just get lonely or bored but we actually, in many cases, lose the capacity to keep track of one’s boundaries of one’s self?”

As she explored further, Dr. Guenther says she felt she needed to be in contact and accountable to those in prison. As a result she started volunteering in prisons in Nashville and eventually set up and facilitated a discussion group for men on death row. Initially the focus of the discussion was on philosophy but broadened to collective inquiry on themes such as restorative justice, radical pedagogy, and friendship.

However, once again she was feeling the call to return to Canada and the Queen’s National Scholar program provided the opportunity.

At Queen’s she is bringing all the experience she has gained outside of Canada and will apply this lens to her homeland.

“On a personal level I have wanted to come back and live in Canada for many years. But also in a philosophical sense and in a political way it’s really important to me to grapple with the history that made me who I am,” she says. “So seeking to understand the way that colonial power and carceral power work together in Canada is also part of my own process of becoming accountable for my own position within those networks in power.”

As a Queen’s National Scholar, Dr. Guenther sees an opportunity to build bridges and to strengthen the ties that are already established between Queen’s, community groups, and community members who are affected by prisons. She also hopes to help strengthen the network of scholars and activists working on these issues.