A star among the stars 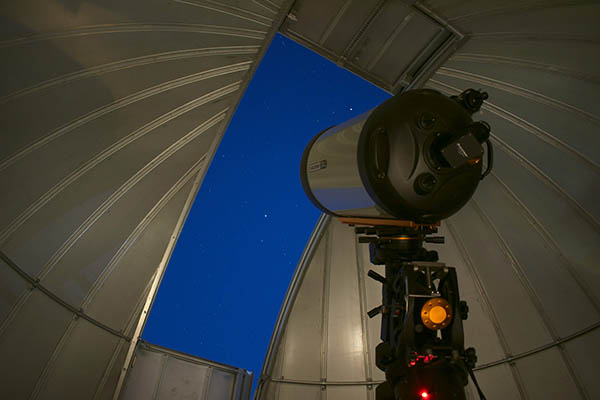 Queen’s University Nobel Laureate Arthur McDonald is the special guest at the next Observatory Open House.

The Queen’s Observatory is offering the public a unique opportunity to hear from someone who has helped push the boundaries of our understanding of how the universe works. Queen’s Nobel Laureate Arthur McDonald will be on hand at this month’s observatory open house to share the story of how he travelled deep underground to study the sun.

Observatory coordinator Connor Stone says Dr. McDonald will also speak about the exciting research that is now flowing from his Nobel Prize-winning work.

“Seeing a Nobel Laureate speak is a rare opportunity to share in their wonder as they explain some amazing research,” says Stone, who was nominated by Dr. McDonald earlier this year to attend the Lindau Nobel Laureate Meeting. “Dr. McDonald’s research is especially interesting as it comes from a Canadian collaboration and has opened the door to new questions in physics that we are still trying to answer to this day.”

Joining Queen’s in 1989 as a professor in the physics department, Dr. McDonald worked as the director of the Sudbury Neutrino Observatory (SNO), the world’s deepest underground laboratory. The SNO team discovered that neutrinos – sub-atomic particles considered one of the basic building blocks of the universe – change from one type to another on their journey to Earth from the sun.

Dr. McDonald is the co-winner of the 2015 Nobel Prize in physics for his research into neutrinos, one of the fundamental particles that make up the universe. He was also recently named a Fellow of the American Association for the Advancement of Science.

After the presentation by the Nobel Laureate, guests will have an opportunity to look through various telescopes and participate in physics experiments.

“The Queen’s Observatory monthly events provide a wonderful opportunity for the public to look at the heavens through an actual telescope on campus and learn about astronomy,” says Dr. McDonald. “I will be talking about how we use unusual particles called neutrinos with a detector two kilometres underground at SNOLAB near Sudbury to study the sun in unique ways. It is part of the new wave of measurements called multi-messenger astronomy and it will be a pleasure to share our work with the public at this event.”