Zoopolis offers a new agenda for the theory and practice of animal rights. Most animal rights theory focuses on the intrinsic capacities or interests of animals, and the moral status and moral rights that these intrinsic characteristics give rise to. Zoopolis shifts the debate from the realm of moral theory and applied ethics to the realm of political theory, focusing on the relational obligations that arise from the varied ways that animals relate to human societies and institutions. Building on recent developments in the political theory of group-differentiated citizenship, Zoopolis introduces us to the genuine “political animal”. It argues that different types of animals stand in different relationships to human political communities. Domesticated animals should be seen as full members of human-animal mixed communities, participating in the cooperative project of shared citizenship. Wilderness animals, by contrast, form their own sovereign communities entitled to protection against colonization, invasion, domination and other threats to self-determination. “Liminal” animals who are wild but live in the midst of human settlement (such as crows or raccoons) should be seen as “denizens”, resident of our societies, but not fully included in rights and responsibilities of citizenship. To all of these animals we owe respect for their basic inviolable rights. But we inevitably and appropriately have very different relations with them, with different types of obligations. Humans and animals are inextricably bound in a complex web of relationships, and Zoopolis offers an original and profoundly affirmative vision of how to ground this complex web of relations on principles of justice and compassion. 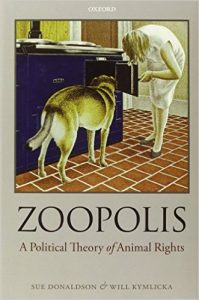 “…deeply serious and brilliantly written …Zoopolis is in fact a courageous book and an intellectual tour de force. It is the most important philosophical work on human-animal relationships since Singer’s Animal Liberation … an inspiration to those people who want to change how humans treat animals.” –Richard Keshen, Literary Review of Canada

“…eloquent and extremely thought-provoking … astonishingly free of sentimentality while still brimming with passion … Books like this – meticulously thought-out, very attractively reasoned, with no hint of screed – do inestimable good in their incremental way, and Zoopolis is among the best I’ve ever read, mainly because it avoids the pitfalls of extremism that would make it look untenable to the unconverted.”–Steve Donoghue, Open Letters Monthly February 2012

“fascinating and path-breaking … There is a huge amount to commend in this rich and novel theory.. Zoopolis is a major contribution to both animal ethics and political philosophy, and will provide much interesting debate”–Alasdair Cochrane in The Philosopher’s Magazine (3rd Quarter, 2012), pp. 115-16

“…a remarkable landmark in the animal rights debate. Like what Nozick said of Rawls’s A Theory of Justice, it would seem that animal rights theorists must either work within the theory put forward by Zoopolis or explain why not”–Tristan Rogers in Journal of Value Inquiry (2012)

“Zoopolis is an amazing book, which proposes to reframe the debate on our relationship with animals in a new theoretical framework…”–Marta Tafalla in Diánoia, Volume LVII, Issue 69 (November 2012): p. 231-237.

“…will take the debate about the limits of liberal citizenship into radical new areas … Zoopolis breaks new ground by looking at animal rights from a genuinely political perspective … It’s a deliciously contentious thesis … will force liberal political theorists to look much harder at the boundaries of citizenship”–Daniel Hutton Ferris in PoliticsinSpires.org, March 16, 2012

“Donaldson and Kymlicka’s contribution builds upon attempts by others to extend justice to non-human animals in an original and compelling manner. They convincingly demonstrate that theories of animal rights lacking a political component are inadequate, and that traditional citizenship theory wrongly excludes many potential coauthors in the destiny of democratic communities.”–Steve Cooke in Global Policy (2012 3:2)

“…convincing both in its criticism of existing animal rights theories and as the outline of a political theory … an important and original contribution to the debate about animal rights”–Eva Meijer in Krisis: Journal for Contemporary Philosophy, 2012

“This is the book that everyone in animal ethics ought to be talking about … extremely well written and carefully argued, and stuffed with fascinating observations about humans, animals and the relations between them … Dream novel: Margaret Atwood reads Zoopolis and creates a fictional world like that.”–Jean Kazez’s philosophy blog, 2012

“…it reinvigorated my view of animal rights and political theory, presenting a compelling, if pretty utopian, picture of just and egalitarian animal-human relations. More importantly, perhaps, it better illuminated my own understanding of my relationship with animals close to me, Mortimer (dog) and Tadpole (cat).”–Samuel Hawke in Social Justice First, July 2012

“Zoopolis and Governing Animals (OUP) are both worthwhile exercises of political theory. They raise interesting questions, seek to fill important gaps in our theoretical frames, and advance our conceptions especially in the realm of liberal political thought. They will therefore be of interest at least to scholars who study political theory, moral philosophy, and law. Both works will also be of interest to those beyond the academy. Both are well written, and, while academic and theoretical in orientation, they are readable and accessible.” —Tulsa Law Review

More about the book