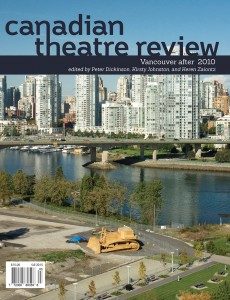 According to the International Olympic Committee (IOC), planning for and working to realize an event legacy for a host city is an essential part of being awarded the Olympic and Paralympic Games. The IOC also mandates that each host city mount a Cultural Olympiad showcasing, often over successive years, the best in local, national, and international art and performance. What, then, is the cultural legacy of an Olympics—and how do we measure it? As playwright and theatre director Marie Clements asks in this special issue of Canadian Theatre Review, what is the equivalent for a local arts community of a gleaming new hockey rink or a sleekly designed swimming pool?

The question is an important one, because while it is most often artists who are called upon to produce the symbolic character, festive tone, commemorative feelings, and aesthetic look of an Olympic and Paralympic Games—via opening and closing ceremonies, public art commissions, performance programming, and even the design of medals, logos, and mascots—it is this same group that often bears the brunt of post-Olympic austerity budgets and funding cuts. In the case of Vancouver, which (together with the resort town of Whistler) hosted the 2010 Winter Olympic and Paralympic Games, these cuts actually began before the Games themselves, and as Duncan Low summarizes in his essay in this issue, arts funding in British Columbia has still not returned to pre-2009 levels. One immediate consequence for the theatre community in Vancouver was that even a venerable institution like the Vancouver Playhouse Theatre Company, whose finances were already precarious, was unable to sustain its operations past the one-time infusion of Olympic special event funding. As Clements and PuSh Festival Artistic and Executive Director Norman Armour both note in these pages, the struggles that existed for the arts community before the Olympics still pertain: access to funding, access to space, and a competition for audiences. (Read More)