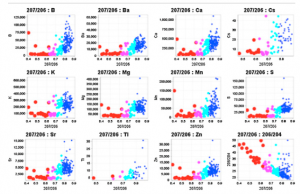 The response in elemental concentrations and Pb isotopes in various surface media from the Cigar West unconformity-type uranium deposit located at a depth of 450 m were measured to ascertain if element migration from the deposit can be detected at the surface. The media included clay-size fractions separated from the A2, B and C soil horizons, and tree cores and twigs from black spruce (Picea mariana) and jack pine (Pinus banksiana) trees. Lead isotopes were used to trace any effect on the surface media from the deposit at depth because the 207Pb/206Pb ratios in the ore are < 0.1, whereas the background values in the basin are > 0.7 and modern anthropogenic Pb from aerosols are near 0.9. The tree cores record their lowest and therefore most radiogenic 207Pb/206Pb ratios of < 0.7 near the surface projection of the deposit and associated structures, particularly in tree rings that predate any exploration and drilling activity in the area. The median 207Pb/206Pb ratios increase in the order C, B soil horizon clays, tree cores, A2 soil clays and twigs because of the increasing contribution of common Pb with high ratios from anthropogenic sources that affect the shallowest media the most. Although this anthropogenic Pb as well as that from the background dominates the composition of all media at the surface and the contribution from the deposit at depth is diminished toward the surface, ore-related Pb is still present as a few percent of the composition of pathfinder elements and Pb isotopes (Read More).