Translation of Words in the Dark, and Eurydice’s Hill (Paola Puppa) 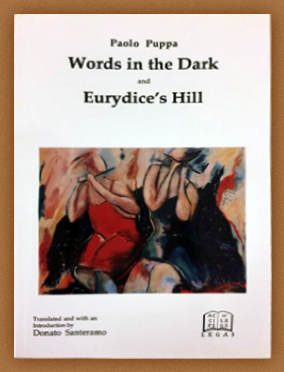 This publication (Legas, 1998) is a translation of two plays by the Italian professor, dramatist, and novelist Paloa Puppa.

Le parole al buio (Words in the Dark) is unique in that it has no ‘real’ characters. This is a trait often found in Paola Puppa’s plays, which indicate the universality of the situations, and at the same time, the indistinctiveness of the characters.

La collina di Euridice (Eurydice’s Hill) can be considered, to a certain extent, an addendum to Le parole al buio, as Puppa continues his investigation into the relationship between theatre, society and death. While in Le parole al buio one is in the presence of a claustrophobic/ Kafkian atmosphere in La collina di Euridice mythology is at the core of the play. (Read More)