Third-harmonic terahertz generation from graphene in a parallel-plate waveguide 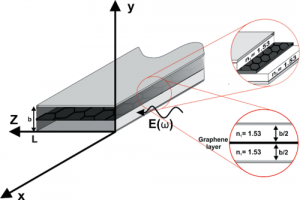 Graphene as a zero-band-gap two-dimensional semiconductor with a linear electron band dispersion near the Dirac points has the potential to exhibit very interesting nonlinear optical properties. In particular, third-harmonic generation of terahertz radiation should occur due to the nonlinear relationship between the crystal momentum and the current density. In this work, we investigate the terahertz nonlinear response of graphene inside a parallel-plate waveguide. We optimize the plate separation and Fermi energy of the graphene to maximize third-harmonic generation, by maximizing the nonlinear interaction while minimizing the loss and phase mismatch. The results obtained show an increase by more than a factor of 100 in the power efficiency relative to a normal-incidence configuration for a 2.0-THz incident field. (Read More)