The Triumphant Juan Rana: A Gay Actor of the Spanish Golden Age 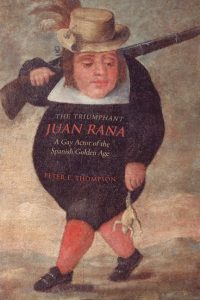 Juan Rana was the most famous buffoon of his time. An actor working during the years 1617-1672, he achieved a status similar to that of the Italian Harlequin and was a favourite of the ruling monarchy and the general populace. Over fifty short plays were written especially for Rana by some of the most important playwrights of the day, including Pedro Calderón de la Barca, who crowned Rana the most famous gracioso of the baroque era.

Juan Rana was arrested in 1636 for the ‘nefarious sin’ of homosexuality and thereafter played more gender bending, transvestite, and homosexual roles. Many of his roles wrestle with issues of gender, sexual, and biological difference but, surprisingly, little work has been done on the important issue of his sexuality. In The Triumphant Juan Rana, Peter E. Thompson examines the actor’s sexuality both on and off the stage and demonstrates that his homosexuality was tolerated, even understood and applauded, by the public. Thompson challenges many preconceived ideas about the Spanish Golden Age and fills an existing void in queer studies of this important period in European theatrical and literary history. (Read More)