The Political Economy of Rockefeller Support for the Humanities in Canada, 1941-1957 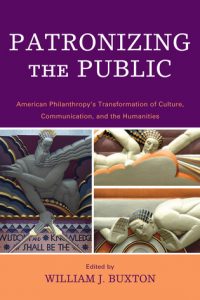 This article was published in William Buxton’s edited collection, Patronizing the public: American philanthropy’s transformation of culture, communication, and the humanities.

This book is the first detailed and comprehensive examination of how American philanthropic foundations have shaped numerous fields, including dance, drama, education, film, film-music, folklore, journalism, local history, museums, radio, television, as well as the performing arts and the humanities in general. Drawing on an impressive range of archival and secondary sources, the chapters in the volume give particular attention to the period from the late 1920s to the late 1970s, a crucial time for the development of philanthropic practice. To this end, it examines how patterns and directions of funding have been based on complex negotiations involving philanthropic family members, elite networks, foundation trustees and officers, cultural workers, academics, state officials, corporate interests, and the general public. By addressing both the contours of philanthropic power as well as the processes through which that power has been enacted, it is hoped that this collection will reinforce and amplify the critical study of philanthropy’s history. Read an excerpt of my article The Political Economy of Rockefeller Support for the Humanities in Canada, 1941-1957