The Oxford Handbook of Music Revival 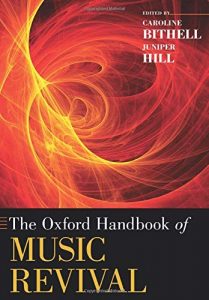 Across many societies and eras people have invoked musical practices of the past in order to reinvigorate or transform contemporary culture. This book, which brings together new research into traditional, folk, indigenous, early music, and dance scenes by an international cohort of thirty scholars, examines revival as theoretical concept, cultural process, and medium of change. Through a combination of conceptual essays and ethnographic case studies, it offers a more geographically and temporally comprehensive examination of revival initiatives than is currently available in any one volume. Extending its purview to cases of renaissance and recovery in diverse parts of the world that have not traditionally been viewed through the revival lens, it reveals the potency of acts of resurgence, restoration, and renewal in reshaping musical landscapes and transforming social experience. The authors’ interrogation of fundamental shifts that have taken place in the late twentieth and early twenty-first centuries—from tradition to heritage, from folk to world music, from bounded to imagined communities, from regional to transnational affiliations—builds on approaches from ethnomusicology, ethnochoreology, historical musicology, folklore studies, anthropology, sociology, and cultural studies. Together, they contribute important new theoretical and methodological perspectives as they bring their findings into dialogue with critical debates across these disciplines. Enriched by their nuanced treatment of issues such as historical reinterpretation, transmission, authenticity, cultural activism, recontextualization, institutionalization, globalization and post-revival legacies, the book offers the reader a deeper understanding of the role and significance of musics we imagine to be historical in today’s postindustrial, postcolonial, and cosmopolitan societies.

This article has been commissioned as part of the Oxford Handbook of Music Revival edited by Caroline Bithell and Juniper Hill. This article investigates the phenomenon of cultural revival in a non-Western context using kathak, the classical dance of North India, as a case study. Although the music and dance revival that accompanied Indian independence from Britain in 1947 shares many characteristics with other revivals such as links with nationalism, middle-class reclamation, classicization, and revised history, there are also significant themes including gender topics, class issues, and shifts in centers of power that seem closely connected to the process of postcolonial nation building. Placing the particular details of the Indian revival into the matrix of postcolonial theories of forced contact and resultant cultural hybridity allows a move towards theories that embrace revival as a global phenomenon. The article ends with the suggestion that in the search for purity and authenticity through revival of past practice, we actually reflect global hybridity.