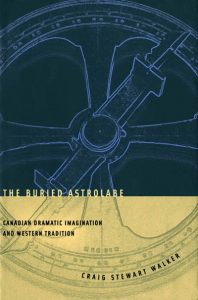 This book offers a criticial introduction to Canadian drama by way of six of the country’s most important contemporary playwrights. Each chapter constitues a study of the poetics particular to one of the playwrights, showing how a personal vision – a “desperate wilderness” – has been explored and dramatized over the course of the writer’s career to date.

What unifies the book is a set of ideas about the circumstances that Canadian playwrights have had to absorb or surmount to achieve the mature poetics found in the work discussed here. The most difficult part of that struggle, and the most significant achievement of the playwrights, has been to establish a mythopoeic context within which a dramatic imagination could reconfigure Canadian experience in its own image rather than a conspicuously borrowed disguise. The very idea of a national drama implies work that is in some essential respects original to the country in question and not wholly derivative; but in Canada’s colonial culture, to transume established European conventions imaginatively was not easy. Although “transume” (or “transumption) is not a common word, I use it regularly here because it captures (better than, say, “adopt” or “assume”) the important imaginative notion of taking over, of transferring or translating a concept or a convention that originated elsewhere so decisively as to make it one’s own.

The playwrights appear here in the chronological order of their births: Reaney (1926), Cook (1933), Pollock (1936), Tremblay (1942), Walker (1947), and Thompson (1954). This may seem arbitrary, but it happens to support a subtle impression that the significant changes in sensibility form one playwright to the next were in some part made possible by the changes in Canadian culture from one generation to the next. My primary crtieria in choosing these particular playwrights were simply that each should have a substantial body of work to discuss and that the work should be of an excellence that would reward extensive analysis. Simply put, I believe the six playwrights discussed here are among the very best and most important Canada has produced.