Molecular dynamics (MD) uses Newton’s equations to simulate the motion of the atoms in a chemical system. To model reactions, the forces must be obtained with quantum chemical (QC) methods as in first-principles MD (FPMD). QC methods are computationally intensive, limiting the use of FPMD to systems containing a few hundred atoms studied on sub-nanosecond time-scales. Meaningful stress rates, which are important for studies of sliding contacts, require the ability to model actual long times. The accessible size and time-scales can be extended if the forces are derived from force-fields (FFs); however, FFs are generally unable to describe reactions. To address these issues we have built on reactive MD methods that switch between FFs during simulations by developing temporal QM/MM methods that use QC forces when reactions occur and FFs otherwise. The rationale is that QC methods are only needed when bonds change, which occurs during only a portion (much less that 1%) of a typical MD simulation. During the rest of the simulation, the bonding is constant and FFs can be used. We have shown that temporal QM/MM can access time-scales several orders of magnitude longer than those accessible with FPMD and reproduces experimental behaviour. We have also developed a means of mitigating the impact of switching potentials on the dynamics of the system.

Present work in this area is focuses on developing metrics that permit the identification of behavior that indicates the onset of chemical reaction when the system is being with an FF that is not designed to allow molecules to react. In addition, we are extending htis method by combining spatial and temporal QM/MM methods to extend the time and size scales that are accessible in MD simulations of reactions. 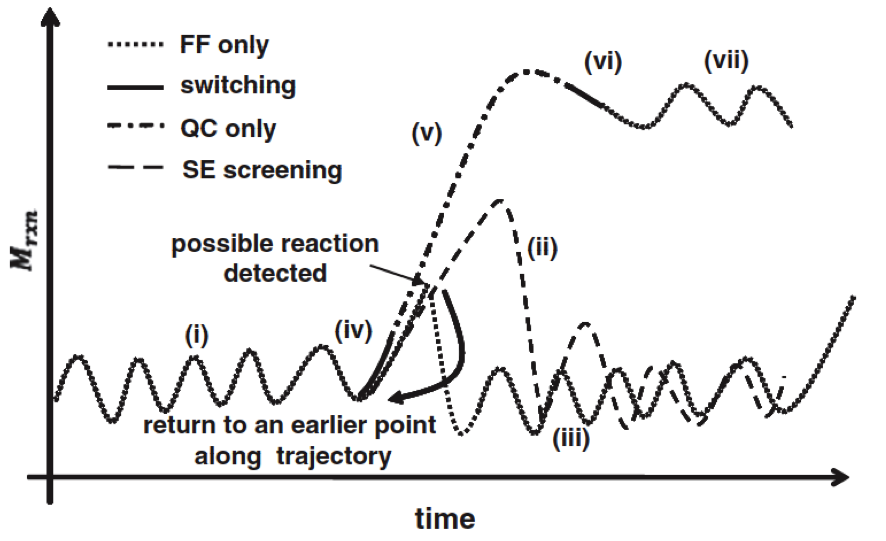