A series of publications, conference papers, presentations and monographs related to T.S. Eliot. 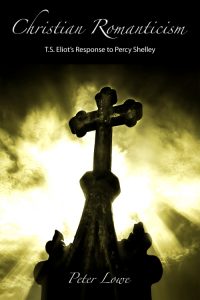 This book presents a reading of T. S. Eliot’s poetry, prose, criticism, and drama, with particular reference to the nature of his response to the influence of Percy Shelley in his own work.

Not just a book on literary criticism, this book is also an insightful study of Eliot’s spiritual life. It focuses on Eliot’s Christian faith and the role it played in molding his responses to the writers who shaped his early works.

Previous studies have ascribed Eliot’s subsequent repudiation of Romantic style and subject matter to a Bloomian ‘anxiety of influence’, and asserted that the highly classical style of his later work was a conscious renunciation of earlier models. This book, however, introduces Eliot’s Christian faith as a means of approaching the issue. In doing so, Peter Lowe opens up a field of Eliot studies not previously explored to the depth it deserves.

Christian Romanticism is a valuable contribution to the field of Eliot studies—it sheds light on a case of poetic influence that has been largely overlooked in previous criticism of arguably the foremost poet of the Twentieth Century.

‘Prufrock in St Petersburg: The Presence of Dostoyevsky’s Crime and Punishment in T. S. Eliot’s ‘The Love Song of J. Alfred Prufrock.’ in Journal of Modern Literature, Vol.28, Number 3 (Spring 2005) 1-24.

‘T. S. Eliot and the Problem of Memory’ – presented at the conference ‘Memory and Textualities’, University of Stirling, March 2002.

‘T. S. Eliot as a Romantic Poet’ – presented at the International Conference of the British Association for Romantic Studies, University of Liverpool, July 2001.