Surveillance and the Eye of God 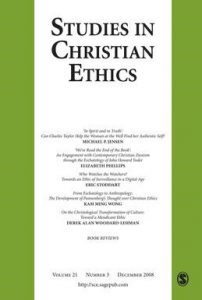 Surveillance is sometimes spoken of as a God’s eye view of the world. This idea is explored in relation to the ‘objective gaze’ of disengaged reason in the Enlightenment and its technologically-reinforced modes in the twenty-first century. The rise of the eye-centred viewpoint is coincident with the ‘great disembedding’ of individuals from the social. This in turn also prompted the self-disciplines of modernity, which are now key aspects of the power-base of modern institutions. A crucial moment in this shift was Bentham’s panopticon proposal, in which the knowledge regime of secularism started to shape social imaginaries in relation to surveillance. While secular omniscience was sought through the surveillance gaze, and explored later in the work of Foucault, Debord and others, the eye-centred view is not without critics. We draw upon some biblical resources, notably, the story of Hagar, that query the centrality of ‘objective vision’. Instead, an ethic of care is proposed, based in part on a fresh understanding of the ‘eye of God’. It is argued that the implications of the care ethic go far deeper than current appeals to privacy, data protection, civil liberties or human rights. (Read More)