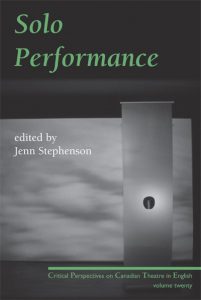 Simultaneously both a very old device and also a relative newcomer, solo performance shifts the terms of the audience’s engagement with the fictional character. With only one performer on the stage, we are invited to pose the question, “Who is this person talking to?” And so, in that bid to address the audience directly, a different kind of relationship is formed between the audience and the character, between actual and fictional worlds. The essays in this collection examine the phenomenon of the solo play or monodrama from a range of perspectives to create a kind of collective portrait of the actor alone on stage.

Critical Perspectives on Canadian Theatre in English sets out to make the best critical and scholarly work in the field readily available. The series publishes the work of scholars and critics who have traced the coming-into-prominence of a vibrant theatrical community in English Canada.