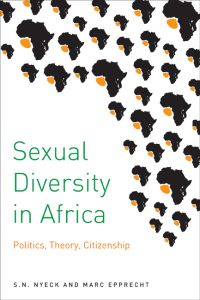 How does one address homophobia without threatening majority rule democracy and freedoms of speech and faith? How does one “Africanize” sexuality research, empirically and theoretically, in an environment that is not necessarily welcoming to African scholars?

In Sexual Diversity in Africa, contributors critically engage with current debates about sexuality and gender identity, as well as with contentious issues relating to methodology, epistemology, ethics, and pedagogy. They present a tapestry of issues that testify to the complex nature of sexuality, sexual practices, and gender performance in Africa. Essays examine topics such as the well-established same-sex networks in Accra and Bamako, African “traditions” defined by European observers, and the bizarre mix of faith, pharmaceuticals, and pseudo-science used to “cure” homosexual men. Their evidence also demonstrates the indefensibility of over-simplified constructions of homosexuality versus heterosexuality, modern versus traditional, Africa versus the West, and progress from the African closet towards Western models of out politics, all of which have tainted research on same-sex practices and scientific studies of HIV/AIDS.

Asserting that the study of sexuality is intellectually and politically sustainable in Africa, Sexual Diversity in Africa contributes to the theorization of sexualities by presenting a more sensitive and knowledgeable study of African experiences and perspectives.