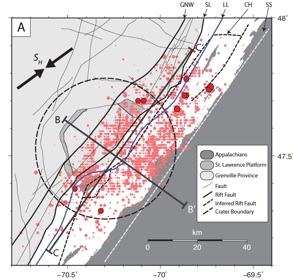 Large earthquakes in stable intraplate regions are rare; they account for only about 5% of the global seismic moment release. However, large intraplate earthquakes do occur, such as the M ≥ 7 events in New Madrid, Missouri in 1811 and 1812, and have the potential of causing great damage. Intraplate seismicity is poorly understood, because of the infrequent occurrence, the short time period of instrument measurements, and the historical misconception that intraplate areas are “stable”. The location of earthquakes are not evenly distributed in continental interiors, they often tend to cluster around pre-existing weakness zones, primarily within areas affected by the last major orogenesis that predates the opening of the present oceans. These weakness zones include fault zones, such as suture zones, failed rifts, and other tectonic boundaries.

Our group conducts research aimed at understanding how ancient faults re-activate under current stress field, and how they can influence the seismicity pattern in intraplate settings (away from plate boundaries). This research involves the study of microseismicity, detailed fault mapping, low-temperature thermochronological dating, tectonic geomorphology, and finite element numerical modelling.

Some examples of past and current projects:

-An investigation of the Deep Creighton structural system and its relationship to mine-induced seismicity, Sudbury, Ontario;

-Crustal stresses and seismicity in intraplate settings: Relationship to geology and driving forces;