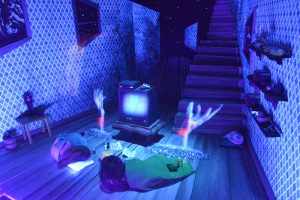 This exhibition consists of several works: a series of sculptures that integrate animation as screen reflections on glass through the special effects technique of Pepper’s Ghost; a diagonally projected animation that uses anamorphosis to reconstitute images; and a soundscape. In the sculptures, animation reflections appear as dimensional apparitions in relation to small-scale sets. This body of work is the result of a long period of engagement with feminist revisionist interpretations of various myths, ranging from Greek myths to European fairy tales, and is inspired by Jungian interpretations of gendered archetypes.

Sleepers and Skeleton Woman were exhibited in the solo exhibition, Standard Play, at the Khyber Centre for the Arts in Halifax, Nova Scotia in May – June 2015, and in the group exhibition, In the Shadow of the Millennium, at the Judith and Norman Alix Art Gallery in Sarnia, Ontario, from September 2016 to January 2017.

The Maiden’s Hand, Medusa’s Corner, and the untitled projection and soundscape are a development of this body of work for the solo exhibition, Scotopia, at La Centrale in Montreal in Febuary – March of 2017. (Read More)