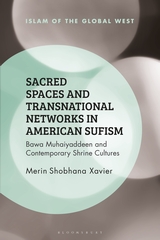 This book sheds light on the Bawa Muhaiyaddeen Fellowship (BMF), one of North America’s major Sufi movements, and one of the first to establish a Sufi shrine in the region. It provides the first comprehensive overview of the BMF, offering new insight into its historical development and practices, and charting its establishment in both the United States and Sri Lanka.

Through ethnographic research, Sacred Spaces and Transnational Networks in American Sufism shows that the followers of Bawa in the United States and Sri Lanka share far more similarities in the relationships they formed with spaces, Bawa, and Sufism, than differences. This challenges the accepted conceptualization of Sufism in North America as having a distinct “Americanness”, and prompts scholars to re-consider how Sufism is developing in the modern American landscape, as well as globally.

The book focuses on the transnational spaces and ritual activities of Bawa’s communities, mapping parallel shrines and pilgrimages. It examines the roles of culture, religion, and gender and their impact on ritual embodiment, drawing attention to the global range of a Sufi community through engagement with its distinct Muslim, Hindu, Jewish, and Christian followers. (Read More)