Refiguring the Coquette: Essays in Coquetry and Culture 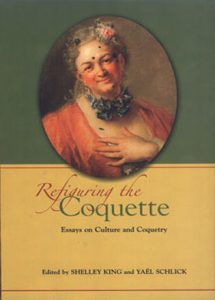 This collection of nine original essays establishes the parameters of coquetry as it was defined and represented in the long eighteenth century, and reconsider this traditional figure in light of recent work in cultural and gender studies (Read More).

“Many of the essays in Refiguring the Coquette…are about performativity, privilege, and abuses that masquerade as kinds of power. The essays discuss in various ways the coquette as a site for moral commentary, for understanding emerging consumer culture, and for gender constructs. They demonstrate that the term was used in different ways and the people who practiced or represented coquetry had a variety of motives; regardless of the differences, they agree that the coquette was a powerful gendering force for both sexes.” – Paula Backscheider, SEL