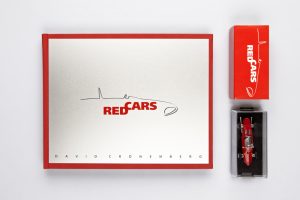 Red Cars is an art book realized by internationally renown Canadian filmmaker David Cronenberg, co-edited with Luca Massimo Barbero, and Domenico De Gaetano, in collaboration with Volumina. The project is an interpretation, in the form of an artbook, of the screenplay Red Cars that Cronenberg planned on turning into a film. The plot is about the 1961 Formula One Championship rivalry between Ferrari drivers: the American Phil Hill and the German Wolfgang Von Trips. This book is hand-bound with an aluminum cover and it is accompanied by a Ferrari 156 F1 model by Brumm. It also contains rare photos taken from the Ferrari archives, and the book itself represents the “body” of the Ferrari “Shark-nose”. (Read More)