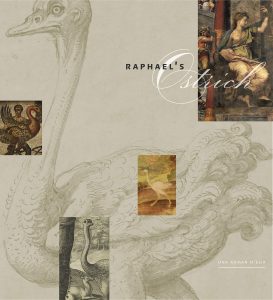 On the wall of the Sala di Costantino in the Vatican Palace, Raphael painted the well-known figure of Lady Justice. But there is something strange here – in one hand, she holds the traditional attribute of the scales, but the other hand, rather than wielding the customary sword, is curled around the neck of an alert, realistic and aggressively ugly ostrich. Why? How would Renaissance visitors to the Vatican have understood this weird interloper? Such questions sparked my interest in the strange allegorical imagery of the 16th century and are the subject of my book, Raphael’s Ostrich (Penn State 2015), which follows depictions of the ostrich through many permutations and shifts in its meaning.

Raphael’s Ostrich begins with a little-studied aspect of Raphael’s painting—the ostrich, which appears as an attribute of Justice, painted in the Sala di Costantino in the Vatican. I trace the cultural and artistic history of the ostrich from its appearances in ancient Egyptian hieroglyphs to the menageries and grotesque ornaments of sixteenth-century Italy. Following the complex history of shifting interpretations given to the ostrich in scientific, literary, religious, poetic, and satirical texts and images, I demonstrate the rich variety of ways in which people made sense of this living “monster,” which was depicted as the embodiment of heresy, stupidity, perseverance, justice, fortune, gluttony, and other virtues and vices. Because Raphael was revered as a god of art, artists imitated and competed with his ostrich, while religious and cultural critics complained about the potential for misinterpreting such obscure imagery. This book not only considers the history of the ostrich but also explores how Raphael’s painting forced viewers to question how meaning is attributed to the natural world, a debate of central importance in early modern Europe at a time when the disciplines of modern art history and natural history were developing. The strangeness of Raphael’s ostrich, situated at the crossroads of art, religion, myth, and natural history, both reveals lesser-known sides of Raphael’s painting and illuminates major cultural shifts in attitudes toward nature and images in the Renaissance.

In an age before Darwin, this enormous bird with its “useless” feathers was a living enigma. Ostriches are central to Egyptian beliefs about the passage to the underworld. They were also hunted in the Roman Coliseum and served up at lavish banquets. In the Middle Ages and Renaissance, they were objects of curiosity in menageries and of study for scientists. Their strange form and habits were read as moral lessons written in the book of nature, in that these beasts were both reviled as images of heresy, stupidity, and gluttony and praised as exemplars of stoic endurance, among other qualities. When the ostrich was depicted in art before Raphael, it was often miniaturized and used as a flat symbol with an obvious meaning. For example, ostriches were frequently depicted with a nail in their beak as a symbol of toughness because of their fabled ability to digest iron.

Raphael’s image of the ostrich was drastically different. In the large, naturalistically-painted bird Raphael veiled the meaning and evoked a hidden knowledge – a sort of modern hieroglyph. Raphael’s invention forces us to ask a profound question − how the natural world is imbued with meaning – that came to a crisis with the rise of the foundations of both modern art history and natural history.

After his death in 1520, Raphael was enshrined as a god of art, and his work was worshipped and copied over and over. His strange conception of the ostrich became a kind of a classic, which could be imitated, emulated and satirized. However, not only did his followers copy the allegory of the ostrich as justice, they played with it in all sorts of ways, gave new life to the bird, and created their own allegories. Men and women played memory games that involved ostriches, danced in ostrich costumes, collected prints of ostriches, made scientific studies of ostriches, wrote poems about ostriches, invented fantastic ostrich tableware, and painted and sculpted the flightless bird in churches, palaces, villas, pilgrimage destinations, and parade floats.  Examining these vivid oddities reveals fundamental issues about art, the natural world, the role of fantasy, and the ways in which images convey meaning in the Renaissance.