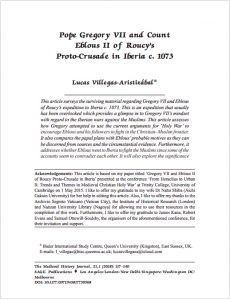 This article surveys the surviving material regarding Gregory VII and Eblous of Roucy’s expedition to Iberia c. 1073. This is an expedition that though historically overlooked, provides a glimpse into Gregory VII’s mindset with regard to the Iberian wars against the Muslims. This article assesses how Gregory attempted to use the current arguments for ‘Holy War’ to encourage Eblous and his followers to fight on the Christian–Muslim frontier. It also compares the papal plans with Eblous’ probable motives as they can be discerned from sources and circumstantial evidence. Furthermore, it addresses whether or not Eblous went to Iberia to fight the Muslims since some of the accounts seem to contradict each other. It will also explore the significance of this episode in the development of Holy War as a preamble to the First Crusade, especially in comparison with the better-known siege of Barbastro of 1064. Lastly, it will also analyse how Eblous’ filial relations with the Aragonese rulers would help create family networks between the Burgundian and Norman nobility and the ruling houses of the Iberian Peninsula in the following decades, and the effect of these on the later involvement of Frankish contingents in the Iberian wars against the Muslims. (Read More)