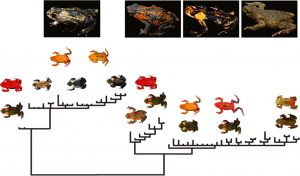 The Yungas Redbelly Toad, Melanophryniscus rubriventris, is patchily distributed in Argentina, confined to the upland portion (1000-2000m above sea level) of the montane forests of northern and central regions of Salta, and in central-eastern and south-eastern Jujuy. This species is known for its striking aposematic color variation across its geographic distribution, and was once treated as a complex of three subspecies based on distinctive color patterns. Here we assess the geographical genetic variation within M. rubriventris and quantify divergence in color and pattern among individuals sampled from Northwestern Argentina. We also compare multi-gene phylogeography of M. rubriventris to patterns of dorsal and ventral coloration to test whether evolutionary affinities predict variation in warning color.

Our results reveal two well-supported species lineages: one confined to the extreme northern portion of our sampling area, and the other extending over most of the Argentine portion of the species’ range, within which there are two populations. However, these well-supported evolutionary relationships do not mirror the marked variation in warning coloration. This discordance between DNA genealogy and warning color variation may reflect selection brought about by differences in local predation pressures, potentially coupled with effects of sexual selection and thermoregulation. (Read More)