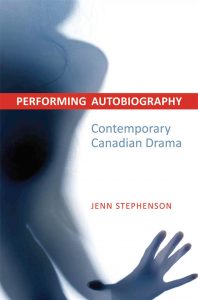 In Performing Autobiography, current work in autobiography studies is linked to drama. The analysis engages with performance histories to demonstrate the extent to which the dramatic form, which recasts autobiography as ambiguously fictive, ensures that the experience of the plays remains open to revision, alteration, and interpretation. As such, Performing Autobiography understands this form not to be the impossible documentation of the backward-looking narrative of one’s life, but rather an evolving process of self-creation and transformation.

I explore the autobiographical form by analysing seven works by Canadian playwrights written and performed between 1999 and 2009, including Judith Thompson’s Perfect Pie, Daniel MacIvor’s In On It, and Timothy Findley’s Shadows. My analysis encourages us to see autobiography as a uniquely political act, one that, where enacted on stage, illustrates the variety of ways that self-reflection and interpretation has an expanding role in contemporary culture.