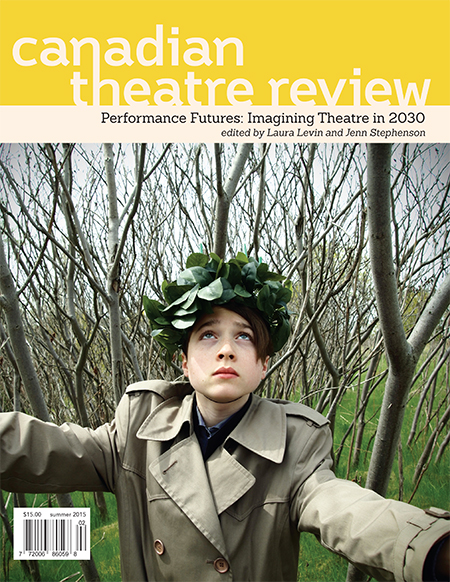 In its scope of interest, Canadian Theatre Review is a forward-looking entity, concerned always with developments in performance in Canada, the writers attentive to trending theatrical events and perspectives that are innovative and cutting-edge. Each issue of Canadian Theatre Review is a report from where we are now. Immediately now. But thinking about the temporal situation of now inevitably entails awareness of how we got to now and speculation about where we go next. The recent Progress: International Festival of Performance and Ideas, presented by Toronto’s SummerWorks in partnership with the Theatre Centre, embodied a similar impulse. In a reflexive interview on the festival’s name, curator Michael Rubenfeld was asked to consider the question, “What is progress?” In his response, Rubenfeld lauded the concept of progress and recognized its power for change but resisted the notion that progress always and necessarily entails growth, offering instead a secondary definition connoting “increasing in scope or severity” (Poon). That same intonation is at work here in this issue on the topic of performance futures. By bringing together a bold cadre of avant-garde voices, we aim to enrich the ecology, stimulating consideration of how change happens, envisioning what kinds of changes we hope for and what kinds of changes we fear.

Contributors to this issue were tasked with considering these futures, not at long range but in the middle distance. These futures are not a thousand years away, nor even a hundred years. We asked them to look around the next corner, to peek ahead a mere fifteen years from now to 2030—a future we can reasonably expect to experience. A future with one foot in the present. And as we look to this near future, our current situation with all its challenges and opportunities comes into sharp focus. Writing about nowhere places and not-yet places, Jacques Rancière says that utopia is a space of dynamic ambiguity, negotiating the relationship between the world as it is and the world as it ought to be. On the one hand, it is, as a non-place, radical and category-breaking, “the extreme point of a polemical reconfiguration of the sensible”; on the other, “it is also the configuration of a proper place, a non-polemical distribution of the sensible universe where what one sees, what one says or does are rigorously adapted to one another” (40). It is on this fulcrum that this issue rests, balanced between what is and what ought to be, between accommodation and adaptation to current conditions and radical, iconoclastic rethinking of the foundations of those conditions.

Mel Gordon in “A History of the Future (to 1984)” gives a short précis of several dozen historical utopian plans for theatre and performance, supplemented with illustrations of these futuristic theatre structures and systems. “Almost by definition, these immodest suggestions, projects and predictions had to have an impracticable, socially undesirable, or technologically unfeasible aspect” (13). Failure is the common denominator of these utopian visions; otherwise, as Gordon points out, they would actually exist. Included in this gallery of failure are such eminent figures as Plato, Francis Bacon, Richard Wagner, Adolphe Appia, Edward Gordon Craig, and, of course, the Italian Futurists, among many others. In the same journal issue, Tony Kushner offers his flip-pant listing of what the future might hold, asserting, “Oh why bother to talk about the theatre of Utopia, or anything having to do with Utopia, when all you have to do is read the paper in the morning and every hope you ever had will be dashed?” (9). This is the crux of thinking about the future. Consideration of the future hinges on drawing attention to present dilemmas. And even with this burden, we believe that taking time to engage the imagination with these airy fantasies is important regardless of the actual answers proposed. True, looking to the future is inevitably an exercise in failure and disappointment, but, nevertheless, we will look and we will hope.