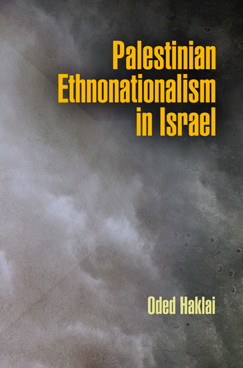 “In Palestinian Ethnonationalism in Israel Oded Haklai analyzes the evolution of political mobilization by Palestinians in Israel. Haklai discusses the extent to which changes in mobilization patterns and objectives reflect a weakening or fragmentation of the state and the Jewish political apparatus that, as he says, has ‘owned’ it. Applying key insights from theories of state-society relations, he portrays a system of control over Arabs that is weakened by intra-Jewish divisions and state retreat but still strong enough to exclude Arab Israelis from equal access to the resources of the country. The book will be of immense value to readers interested in the proliferation of Palestinian political activity in Israel and in understanding why the aspirations that fuel it are unlikely to be met.”—Ian Lustick, University of Pennsylvania

Arabs make up approximately 20 percent of the population within Israel’s borders. Until the 1970s, Arab citizens of Israel were a mostly acquiescent group, but in recent decades political activism has increased dramatically among members of this minority. Certain activists within this population claim that they are a national and indigenous minority dispossessed by more recent settlers from Europe. Ethnically based political organizations inside Israel are making nationalist demands and challenging the Jewish foundations of the state. Palestinian Ethnonationalism in Israel investigates the rise of this new movement, which has important implications for the Palestinian-Israeli conflict as a whole.

Political scientist Oded Haklai has written the first book to examine this manifestation of Palestinian nationalism in Israel. Drawing on extensive fieldwork and interviews with key figures, Haklai investigates how the debate over Arab minority rights within the Jewish state has given way to questioning the foundational principles of that state. This ground-breaking book not only explains the transitions in Palestinian Arab political activism in Israel but also presents new theoretical arguments about the relationship between states and societies. Haklai traces the source of Arab ethnonationalist mobilization to broader changes in the Israeli state, such as the decentralization of authority, an increase in political competition, intra-Jewish fragmentation, and a more liberalized economy.

Palestinian Ethnonationalism in Israel avoids oversimplified explanations of ethnic conflict. Haklai’s carefully researched and insightful analysis covers a neglected aspect of Israeli politics and Arab life outside the West Bank and Gaza. Scholars and policy makers interested in the future of Israel and peace in the Middle East will find it especially valuable.