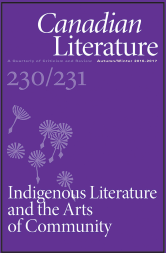 This paper focuses on the coerced alienation of Indigenous men from their own bodies by colonial technologies like residential schooling. I argue that the gender segregation and the derogation of the feminine and the body that occurred systematically within residential schools were not merely by-products of Euro-Christian patriarchy; they were not just collateral damage from aggressive evangelization by decidedly patriarchal religious bodies. Rather, this nexus of coercive alienations lay at the very core of the Canadian nation-building project by which the residential school system was motivated. The systemic manufacturing of Indigenous disavowals of the body served—and serves—the goal of colonial dispossession by troubling lived experiences of territory and effacing kinship relations that constitute lived forms of governance. In this paper I thus rehearse the preliminary steps of an inquiry into a crucial but heretofore unasked question in this era of supposed reconciliation in Canada: If the coordinated assaults on Indigenous bodies and on Indigenous cosmologies of gender are not just two among several interchangeable tools of colonial dispossession but are in fact integral to the Canadian colonial project, can embodied actions that self-consciously reintegrate gender complementarity be mobilized to pursue not simply “healing” but the radical reterritorialization and sovereignty that will make meaningful reconciliation possible? I pursue this question through the study of autobiographical and fictional writings by residential school survivors as well as testimony from the Indian Residential Schools Truth and Reconciliation Commission. The paper examines a variety of Indigenous contexts—including Gwich’in, Mi’kmaq, Inuvialuit, Maori, and Maoli—to demonstrate the widespread and systematic nature of residential school technologies of disembodiment; yet, having begun with the testimony of a Cree residential school survivor, the paper hinges on analysis of a poem by a Cree writer before culminating in discussion of the extra-literary, embodied actions of Cree men who, I argue, model what Cree scholar and poet Neal McLeod refers to as the “ideals of the okihcitâwak (‘worthy men’) from kayâs (long) ago” (Gabriel’s Beach 10).(Read More).