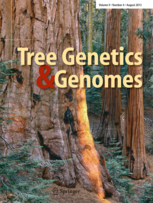 Microscopic analysis of the midvein of the rippled leaf mutant revealed that the mutant possessed significantly smaller and more numerous cortical parenchyma cells in its midvein compared with wild type. As well, in rippled leaf, the vascular tissue represented a larger proportion of the midvein. In transgenic lines, there was a similar change in cortical cell size, and an even larger proportion of the midvein was vascular tissue. In conclusion, a mutant with a leaf alteration phenotype was characterized. The CYCD1;2 gene was found to be responsible for this phenotype, and the phenotype was recapitulated using overexpression of transgenic lines. Further studies with mutants such as rippled leaf are necessary for a better understanding of cell division and its relationship to plant growth and development.  (Read More)