On the Nature of Marriage: Somerville on Same-Sex Marriage 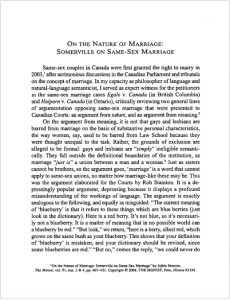 This article critically reviews an argument against same-sex marriage presented to Canadian Courts by Margaret Somerville based on “a basic presumption in favour of the natural.” It scrutinizes the claim that opposite-sex couples represent “a naturally, inherently procreative relationship” while same-sex couples do not, as well as the reasoning to the conclusion that the alleged difference justifies separate institutions. It criticizes the use Somerville makes of the language of “norms,” and hints at the disastrous consequences her viewpoint would yield regarding adoption. The article reveals her argument in its full circularity, and shows that Somerville fallaciously targets same-sex marriage since her real issue is with in vitro fertilization (IV) from donor gametes, something neither universal in, nor exclusive to, same-sex marriages. Deliberately restricting same-sex couples to civil unions is unfair both to the children in those unions, and to same-sex couples if they alone must bear the cost of reducing IVF-produced life. (Read Article)