On the Global Mass Distribution in Disk Galaxies 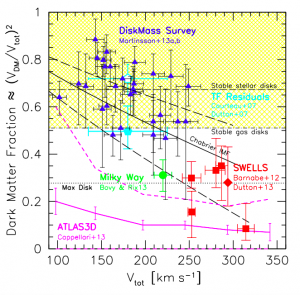 In this paper, we present a summary of recent assessments of the mass distribution in disk galaxies. Of issue, in order to characterize galaxy formation models, is to determine the relative fraction of baryons and dark matter at all radii in galaxies. For disk galaxies, various measurements of the mass distribution in galaxies based on vertical kinematics, strong lensing, residuals of scaling relations, fluid dynamical modeling, bar strength and pattern speed, warps, and others, have called for either a maximal or sub-maximal contribution of the baryons in the inner parts of the disk.

We propose a global picture whereby all galaxies are typically baryon-dominated (maximal) at the center and dark-matter dominated (sub-maximal) in their outskirts. Using as a fiducial radius the peak of the rotation curve of a pure baryonic exponential disk at R_2.2=2.2 Rd, where Rd is the disk scale length, the transition from maximal to sub-maximal baryons occurs within or near R_2.2 for low-mass disk galaxies (with V_tot < 200 km/s) and beyond R_2.2 for more massive systems. The mass fraction’s inverse dependence on circular velocity in disk galaxies is largely insensitive to the presence of a bar at R_2.2. The mean mass fractions of late- and early-type galaxies are shown to be different at the same fiducial radius and circular velocity, pointing to different galaxy formation mechanisms. Feedback, dynamical friction, size, and IMF variations are key ingredients for understanding these differences. (Read More)