Nutritional Dystrophy: The Science and Semantics of Starvation in World War II 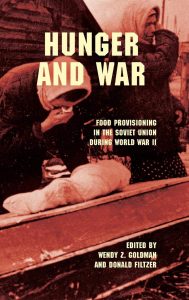 In my chapter of the volume Hunger and War: Food Provisioning in the Soviet Union during World War II, edited by Don Filtzer and Wendy Goldman, I examine the emergence of nutritional dystrophy, and how hunger and starvation were studied and documented in medical research as a widespread, multi-stage medical condition, during the Second World War.

Drawing on recently released Soviet archival materials, Hunger and War: Food Provisioning in the Soviet Union during World War investigates state food supply policy and its impact on Soviet society during World War II. It explores the role of the state in provisioning the urban population, particularly workers, with food; feeding the Red army; the medicalization of hunger; hunger in blockaded Leningrad; and civilian mortality from hunger and malnutrition in other home front industrial regions. New research reported here challenges and complicates many of the narratives and counter-narratives about the war. The authors engage such difficult subjects as starvation mortality, bitterness over privation and inequalities in provisioning, and conflicts among state organizations. At the same time, they recognize the considerable role played by the Soviet state in organizing supplies of food to adequately support the military effort and defense production and in developing policies that promoted social stability amid upheaval. The book makes a significant contribution to scholarship on the Soviet population’s experience of World War II as well as to studies of war and famine. (Read More)