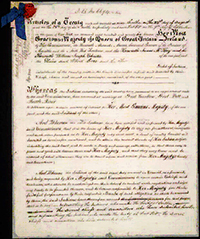 Nikawiy narratives including Mother to daughter, nation to nation, spirit and intent, and Treaty Enforcement will be based on nikawiy (my mother’s) teachings that I will interpret as my inherent role as Nehiyaw Iskwew (Cree woman) specifically for governance and numbered Treaty Enforcement. My proposed methodology is also based on Circle of Life, Pimatisiwin, Calendar (Poitras, 1996) curriculum that is related and included in the “universe is listening to me” paskwaw moostoos Treaty Law School (Poitras, 2016). We are from the Peepeekisis Cree Nation in what is now known as Saskatchewan. My mother osawastimahkoop iskwew is originally from Onion Lake on what is now the border between Alberta and Saskatchewan. Peepeekisis is in Treaty Four territory and Onion Lake is in Treaty Six territory.

Is there a ‘gap’ for the role of Indian women and Nehiyawak Iskwew in the Indian Treaty negotiations and generally in leadership? Though such a ‘gap’ may be said to be relatively common knowledge perhaps from the time of the treaty negotiatiors, a comprehensive and chronological review has yet to be produced that may prove this. Treaty Four was entered into in 1874 and Treaty Six in 1876. Before this and in historical accounts, this gap may also be apparent and indicative of European/settler ethnocentrism based on white male research and documentation of this history. The colonial disruption of the Indian Residential School, in particular, would have also impacted oral transmission of any history including the role of women in the treaty negotiations that might also denote a role in governance and leadership. In a contemporay context, the question for this role is the search for inherent foundations that may be identified as the base to contemporary governance and leadership frameworks for Cree women in Treaty Four and Treaty Six.