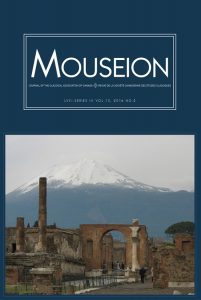 Published in Mouseion: Journal of the Classical Association of Canada (Vol 13, Number 2):

Excavations conducted by Queen’s University in the central area of the Etruscan city of Caere, near the so-called hypogaeum of Clepsina, have brought to light a sequence of phases indicative of a longer and more complex history of urban occupation at the site than previously thought. The earliest stratigraphic evidence uncovered so far dates to the Late Iron Age, followed by an Orientalizing building with wall paintings, an important Archaic phase, and a large-scale renovation datable to the 3rd century BC. Occupation was intense until the late first and early second century ad. Excavation and geophysical prospection have revealed a regular urban plan in the area between the centre of the city plateau and the sanctuary of Manganello. Research within the hypogaeum, particularly infrared imaging, has allowed for a better reading of wall paintings, drawings, and inscriptions, including two previously unknown texts. (Read More)