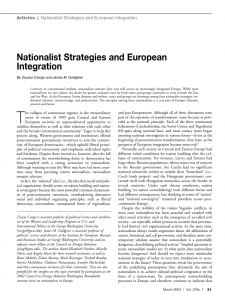 Contrary to conventional wisdom, nationalism remains alive and well across an increasingly integrated Europe. While most nationalisms are not violent, the desire for greater national voice by both states and groups continues to exist in both the East and the West. As the European Union deepens and widens, states and groups are choosing among four nationalist strategies: traditional, substate, transsovereign, and protectionist. The interplay among these nationalisms is a core part of Europe’s dynamic present and future. (Read More)