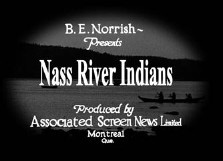 Sparked by my interest in the National Gallery of Canada’s 1927 exhibition, “Canadian West Coast Art, Native and Modern,” for which the silent movie, Nass River Indians, was made, and based on both extensive archival work and field trips to the Nass River, this research project has resulted in reconstruction of Nass River Indians from archival remnants as a scholarly edition, a project I undertook in collaboration with film conservator Dale Gervais at Library and Archives Canada. Featuring additional intertitles designed to reposition the original film for contemporary audiences, Nass River Indians has subsequently toured internationally as part of the Anthology Film Archives and Deutsches Filmmuseum exhibition, “Unseen Cinema: Early American Avant-Garde Film 1893-1941.” (I also contributed an essay to the show’s catalogue that dealt with the film’s hitherto unknown importance as the first effort of US-American experimental filmmaker James Sibley Watson, who shot the film’s footage for National Museum of Canada ethnologist Marius Barbeau.) I have also developed this research in screenings, conference presentations, invited papers and, in conjunction with these, four articles dealing with various aspects of the film and ethnographic cinema in Canada. In these, I have embedded close textual readings of the lost Nass River Indians and related ethnographic films in extensive discussion of the historical, political, cultural and exhibitionary contexts within which they were understood. (Watch Video)

Marius Barbeau and Early Ethnographic Cinema, in Around and About Marius Barbeau: Writings on the Politics of Twentieth-Century Canadian Culture