Multiple-object Tracking as a Tool for Parametrically Modulating Memory Reactivation 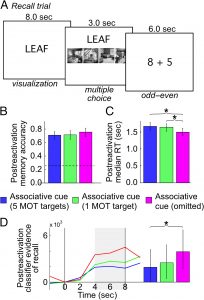 Converging evidence supports the “nonmonotonic plasticity” hypothesis, which states that although complete retrieval may strengthen memories, partial retrieval weakens them. Yet, the classic experimental paradigms used to study effects of partial retrieval are not ideally suited to doing so, because they lack the parametric control needed to ensure that the memory is activated to the appropriate degree (i.e., that there is some retrieval but not enough to cause memory strengthening).

Here, we present a novel procedure designed to accommodate this need. After participants learned a list of word–scene associates, they completed a cued mental visualization task that was combined with a multiple-object tracking (MOT) procedure, which we selected for its ability to interfere with mental visualization in a parametrically adjustable way (by varying the number of MOT targets). We also used fMRI data to successfully train an “associative recall” classifier for use in this task: This classifier revealed greater memory reactivation during trials in which associative memories were cued while participants tracked one, rather than five, MOT targets. However, the classifier was insensitive to task difficulty when recall was not taking place, suggesting that it had indeed tracked memory reactivation rather than task difficulty per se. Consistent with the classifier findings, participants’ introspective ratings of visualization vividness were modulated by MOT task difficulty. In addition, we observed reduced classifier output and slowing of responses in a postreactivation memory test, consistent with the hypothesis that partial reactivation, induced by MOT, weakened memory.

These results serve as a “proof of concept” that MOT can be used to parametrically modulate memory retrieval—a property that may prove useful in future investigation of partial retrieval effects, for example, in closed-loop experiments. (Read More)