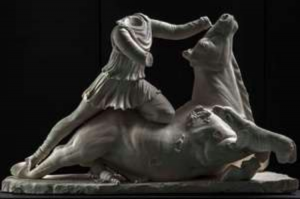 This paper was presented at the conference Symposium Peregrinum 2016, Tarquinia: The Mysteries of Mithras and other Mystic Cults in the Roman World, in Tarquinia-Vulci-Marino, Italy.

The hypogaeum of Clepsina in the urban area of Caere has been the object of much debate in the last few years, but has been considered primarily in relation to the transformation of the ancient Etruscan city into a Roman praefectura in 273 BCE. Among the inscriptions traced in the later phase of usage of the hypogaeum is a sketch that has been often identified as the chariot of the Sun. The use of infra-red photography has allowed for better visibility of the image through the thin accretion of calcium carbonate that partially covers it, revealing that this is certainly a figure with radiate crown slaying a bull held down by his knee. This small figure sketched with fast, sweeping strokes appears to be Mithras Tauroctonos, even though there are some small differences from the canonical representation of the tauroctony. This paper aims to explain the presence of this image in a place of the highest symbolic significance for the community of Caere, marked by the inscription of the first praefectus iure dicundo and by high quality wall painting, and then used for the celebration of the Rosalia festival. The layout of the monument, its phases, its decoration, its hypothesized nature of Mundus, and its relationship to the annual cycle of the sun, will be analysed to understand why one of the later users of this space, perhaps one of those who wrote the Rosalia inscriptions, may have found it appropriate to draw here an image of the popular god. The evidence from Caere will be studied in the context of the growing number of documents of the cult of Mithras in Etruria, to which this is one of the new additions. (Read More)

School of Kinesiology and Health Studies