Milton Santos: A Pioneer in Critical Geography from the Global South 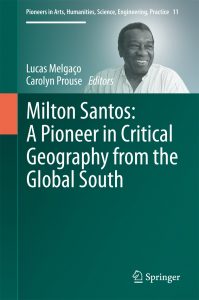 For decades, the Brazilian geographer, Milton Santos (1926-2001) has been considered one of the most influential thinkers in Brazilian and Latin American social sciences and geography. Yet, his writings, most of which have not been translated into English, are largely unknown to European and North American audiences. This book introduces English-speaking scholars to Professor Santos through critical engagement with his ideas and writings. The chapters presented here reveal the breadth and originality of his critical thought, as well as its ongoing importance to contemporary debates. The book features a biography of Santos and includes an annotated translation of one of his most-cited texts, The Return of the Territory, offered here for the first time in English. This text demonstrates how Santos’s provocative insights continue to transform core concepts of political and human geography. The book also includes a number of short chapters written by scholars from Brazil, Spain and France. Through reflections on Santos’ work, the various authors demonstrate the value and possibilities of extending the geographer’s theories. They explore key geographical themes across political economy, rural studies, territorial planning, environmental crisis, digital networks, indigenous peoples, transportation and public health. This collection invites geographers from around the world to engage with this rich intellectual tradition from Brazil. (Read More)