MEGA-EVENT CITIES brings together leading scholars, artists, and activists to examine the role of the arts in articulating the social agendas of urban mega-events like Olympic Games and World Expos. As mega-events circulate from one city to the next, they leave complex (often ruinous) infrastructural legacies for artists and communities, with scenarios of national celebration transiting swiftly to austerity measures and socially cleansed urban cores. The contributors to PUBLIC 53 engage with the exhilaration and sober aftermaths of the “mega” by taking stock of the fluid politics of officials who seek to commemorate mega-events through public art programs, and activists who choose to question the same events through creative acts of resistance. With particular focus on Vancouver and London—but ranging beyond to Sochi, Rio, Milan, Calgary, and Baku, Azerbaijan—this issue asks how art and culture can intervene in the pressing security, human rights, and environmental issues that shape mega-events. Mega-Event Cities addresses the local politics of global placemaking and shows the shared artistic practices, performative interventions, and resistant acts that can be found across host city sites. 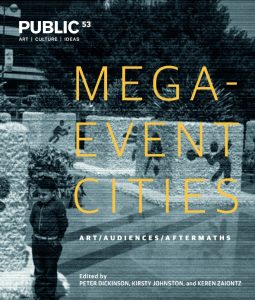 The Illusion of Inclusion: Agenda 21 and the Commodification of Indigenous Culture in Olympic Games

Olympian Performance: The Cultural Economics of the Opening Ceremony of London 2012

Media Archaeologies of the Olympic City

PART 3: Reflections on Art and Activism after the “Big Show”

INTERVIEW. The Aesthetics of Austerity: A Conversation with Liz Crow

All that Glitters: Sport BP, and Repression in Azerbaijan (“The Great Coming Out Part of Azerbaijan” and “What the Marriage has Created”)

PROJECT: States of no Exception: EXPO 2015 in Milano