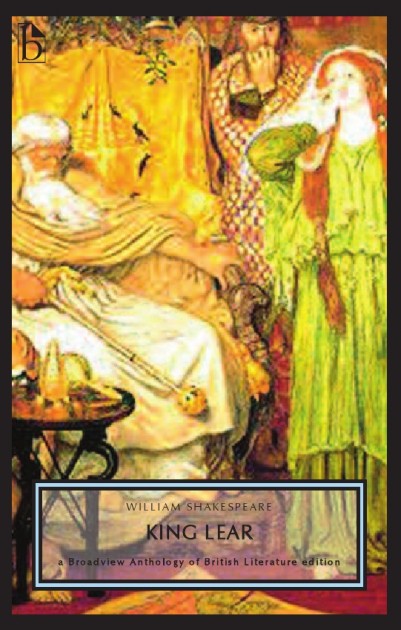 The text of the play included here, prepared by Craig Walker for The Broadview Anthology of British Literature, has been acclaimed for its outstanding introductory material and annotations, and for its inclusion of parellel text versions of key scenes for which the texts of the Quarto and the Folio versions of the play are substantially different.

Also included in this edition are excerpts from a variety of literary source materials (including Geoffrey on Monmouth’s Historia Regum Britanniae, the anonymous True Chronicle Historie of King Leir, and Samuel Harsnett’s A Declaration of Egregious Popish Impostures); material on the historical Annesley case that raised many of the same issues as does Shakespeare’s play; and the happy ending from Nahum Tate’s version of the play, which held the stage for 150 years after its first performance in 1681.

“The Broadview chooses the Folio as the basic text, but, significantly, adds notes throughout that point out the differences appearing in the Quarto version. In addition, in the case of the three scenes in which differences are most pronounced, the anthology prints both Folio and Quarto versions side by side. This method opens up illuminating and exciting possibilities in the classroom…. I regard the unhesitating confrontation with the difficulties of King Lear that is shown by the Broadview editors as a microcosmic illustration of the toughness, determination, and conscientiousness of the editors throughout this entire British literature anthology.” — Robert H. Ray, Baylor University (author of Approaches to Teaching Shakespeare’s King Lear)

“… an exciting achievement … It sets a new standard by which all other anthologies of British Literature will now have to be measured.” — Graham Hammill, SUNY—Buffalo

“The Broadview Anthology of British Literature is no mere pretender to the throne long held by Norton; it is the new standard.” — Richard Nordquist, Armstrong Atlantic State University